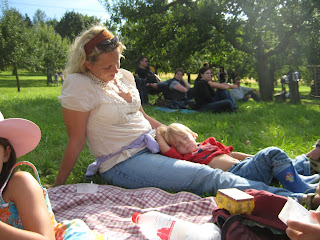 I am a mother.

I am not a piece of furniture, a place to rest your head, a source of refuge, a security blanket, a cup holder, a provider of food and beverage as well as various articles of clothing, a pack mule, a place holder, a trash can, a hand, face and nose wiper, holder of the kleenex.....

Oh, who am I kidding?

We all went to the International Motocross in nearby Holzgerlingen the other week. I don't get to watch the races much; see the list as to what I am invited along for.

For one brief moment, I was able to lay on my back on the grass, eyes closed, for what passes as solitude in my current existence; motors roaring, you take what you can get. There were no kids around for a second.

I opened my eyes to find a tall, lean, good-looking blonde man in his early thirties looking down at me. (True story. It was actually rather disconcerting.) "Hello." he smiled, eyes certainly twinkling at me behind his trendy sunglasses. "Do you mind watching my bag?"

I give up. There must be a sign tattoed on my breasts. "Mother," it says "the source of all things."

I like to think other women are taking care of my men when I allow them out alone.

It got me to thinking though. Honestly, if men were REALLY running the world, I mean REALLY running it, managing the grocery lists, the household chores, the kids' school schedules in addition to their "real" job, I think the world might actually be a better place. If more chaotic and messy.

Hear me out. I mean, even Obama, darling of the free world and one of the most powerful men on the planet, admits in his book that his wife still yells at him for not putting the butter away. This man is in charge of the largest armed forces in the world, and he can't remember to clean up the kitchen. That's not cute. That's insulting.

So, if it weren't for Michelle, and all of the Michelle's out there, getting food on the table, buying winter jackets, taking the car in for it's 30,000 mile checkup, keeping vaccinations up to date and all the rest, I'm thinking the world would fall apart. Peacefully. Daddies everywhere would be too busy trying to figure out how to coordinate the Tuesday soccer/ballet carpool to even bother trying to invade another country.

Then again the American military has been doing it without any real strategy for years now.

I tried my own strategy for world domination - or at least a little peace and quiet - the other day. Nobody was really thrilled with the lunch I had whipped up, admittedly rather hastily. (Am I the only mother on the planet whose kids don't like spaghetti?) When Andrew came into the kitchen half an hour later to ask for a granola bar, I gave in. However, when Aidan heard the wrapper and came in too, I also asked Andrew to get one for his little brother. By the time Andrew had opened one for Matthew as well, he just looked at me in exasperation, gave a deep sigh and said, "oh Mom, those two are just too much sometimes."

Welcome to my world son. Let's change it together!
Posted by Twintensity at 12:08 AM