The Pants Of Shame 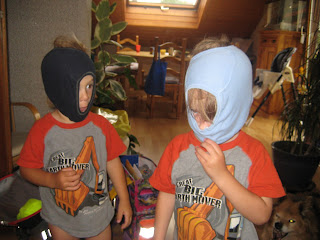 Matthew came home from kindergarten on Tuesday with FOUR pairs of wet clothes in the "bag of shame."

This is a term freely stolen from my friend Holly, whose daughter came out of our kindergarten one day two years ago wearing this horrible, 1970s, very German, pair of rainbow colored striped jeans, a pair that Ryan and Andrew had worn home often enough in their potty training days. She laughingly called them the "pants of shame" because it was just so obvious that whoever came out wearing them had NOT made it through the morning dry.

I have since discovered - mostly through Matthew - that there are a variety of pants of shame - and that they come with socks, T-shirts - and even pink flowered girls underwear if you wet yourself often enough to start deleting the stock. You should have seen the look on Damon's face when he saw Matthew in pink underwear.

Funny thing is, shame only works if you let it. (For the record, Holly's term is a joke, and the kindergarten isn't intentionally shaming the kids either. They just have a rather horrid selection of second-hand clothes.)

Matthew certainly doesn't care about the pink underwear. And now that I've decided to give up things like guilt (I swear, I shook it off in yoga class the other day!), and anger and shame - well, the clothes my kids come home in don't bother me either. Honestly, if I am going to let a pair of soiled pants ruin my day, I might as well give up now.

I'm learning that it's not about being perfect, it's about dealing with it as it comes.

Other signs that I am learning not to care about what other people think:

1. I let the kids go home from the pool with wet hair (within reason; in the winter we use the hairdryers a bit and then make sure everyone is wearing a hat or hood - or in some cases, a towel over her head - on the icy way to the car.) They also run around in wet bathing suits - a big German no-no. No signs of the bladder infections or kidney disease this is supposed to cause and they have fewer colds than most kids I know whose mother's dry their hair. I suspect a strengthened immune system. See #4 below!

2. My kids are the ones running around without jackets on when everyone else's are wrapped up in hat, scarf and mittens. Or wearing mittens in April.

3. I'll wip out a bag of cookies at the playground when everyone else is feeding their children peppers and cucumbers.

4. Damon and I used the "5 second" rule in Legoland the other day when Matthew spilled the 3 Euro bag of lego-shaped french fries on the ground while in line for the train ride. I briefly thought of the dirt, and of what the others in line would say, and then I thought of the 3 Euros for 15 fries - and we scooped them right up and handed them back to Matthew. Gross. I wasn't going to eat them, but....noone in line said a word, whether out of shock, understanding or because they attributed it to the fact that we were American.

HAVE YOU NO SHAME? No, I'm glad to say I gave it up this summer.
Posted by Twintensity at 7:25 AM