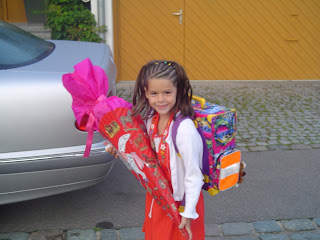 Third grade math has me rethinking the whole nature/nurture thing. Before I had kids, I was a firm believer in nurture over nature; that how we raised our children and what we taught them, the morals we instilled in them, would win out over their genetics, their ingrained natures. Or even what they later picked up from their friends or in the media. In other words, I would do everything right, the way the parents of that two year old screaming in aisle four obviously weren't, and my kids would turn out the way they should. Go ahead and laugh. If you're not laughing, you don't have any kids yet.

The honeymoon phase lasted a couple of years. I had a dream child, a daughter, and it was easy to do everything right because, in retrospect, she never did anything wrong. Ryan slept through the night at three months, never needed a pacifier, and I don't even recall switching her from breast to bottle to cup. It was that easy. Of course, I credited myself and my absolutely perfect parenting techniques and remember wondering what all the fuss was about. Or maybe I was just a born mother?

Humility came in the form of my second child, Andrew, when Ryan was two years old. He didn't sleep through the night for two and a half years, wouldn't take a pacifier and carried a bottle until well into his second year. My views on parenting were already changing: when a pediatric nurse commented on the bottle at eighteen months I remember thinking, yeah and then you fly back ten hours on the airplane with him.

I had done the same things with both of them; those things just weren't working on Andrew. I went from believing in nurture to wondering how professional criminals behaved when they were babies. I mean, something HAD to be inherently wrong with this child, right?

It's a wonder that we even tried for a third pregnancy. (Some of us are very slow learners!) But the twins, who are fraternal, are as different as two kids can be. And I KNOW I did everything the same with them.

It'd be easy to blame Ryan's problems with third grade math on genetics and leave it at that. I mean I did everything right with this child; according to my former beliefs in nurture, she should be TEACHING third grade math by now.

But then I realized that that's a cop-out, that chalking it all up to nature is just the easy way out. Sure, her nature is making it harder for her in school than for other kids. But that's when the nurturing is just beginning. The real test isn't about nurturing the kids through the easy steps; believe it or not, ALL of them would have figured out the whole toilet process on their own eventually, regardless of the technique you used. Nurturing isn't about the fact that your child can read before she enters school; good for her - and for you - if she does, but it's not about the stuff your child does easily, its about the stuff she finds hard.

It'd be so nice to have a child to whom it all came easily, believe me I know. I have one of those too - the one whose teacher calls regularly to tell me how fantastic he is. And he was the one who cried for the first two and a half years. Go figure. I'll take some credit - but then again it's the exact same stuff that isn't working so well with his sister.

I'd like it if things always went according to plan, but admit I learn more when they don't. Third grade math has taught me that the real test, the real nurturing, begins when the going gets tough. Sleepless nights at eighteen months. Math problems in grade school. The wrong crowd in highschool. And its not about what you, as a parent, did right or wrong up to that point, but how you deal with it from that point on.

Oh yeah - I also finally learned the metric system.
Posted by Twintensity at 7:30 AM