Four at the Pool (Part One of Three) 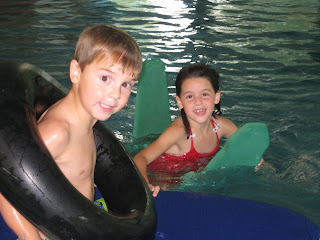 Before I had kids, I had a perfect plan for spacing them - never have too many kids so close together that you cannot take them to the pool. This meant I would have time to devote to them when they needed me and also would keep me from having to give up the active outdoor lifestyle I enjoyed. Nothing pissed me off more than women, or couples, who used their children as an excuse for not being able to do something - like hiking, or canoeing, or overnight camping. What the heck were we having kids for anyway, if not to show them the world?

And then the twins were born. I believe they were meant to teach me humility.

I opted out of the overnight canoeing trip our playgroup took last summer, when the twins were 18 months old. I mean, one COULD do it with four kids, including the two toddlers, but who would really WANT to? The thought of chasing the two of them around a firesite and then trying to keep them both in canoes just wasn’t a fun one. We DO go hiking though - if that’s what you call two kids in and out of a stroller and two older ones riding up ahead on their bicycles and then coming back to complain that they would have rather stayed home and played on the computer.

But that’s why I’m allowed to brag about the pool thing. I am not the perfect mom, with the clean home, dinner in the oven, a business on the side and…oh yeah, I can also get four kids to the pool for swim lessons once a week. (Doesn’t everyone?) In fact, the reason I did and still do get four kids to the pool is that I am a crazy mom, with a less-than-clean home and no dinner in the oven. That and swimming is important to me.

This is by no means a “how to” article. It’s more of an “anything is possible if you want it badly enough” article. And I wanted to be able to enjoy the brief German summers we have at the outdoor pool with my kids. So, when I was pregnant with the twins, I enrolled my 6 year old daughter, Ryan, in swim classes at the indoor pool. Andrew, aged 4, and I splashed in the kiddie pool alongside. The lifeguard, unaware that I was pregnant, let alone with twins, told me Andrew was one of the most active kids he’d ever had to keep an eye on. And I thought, you ain’t seen NOTHING yet! We continued with lessons regularly, right up ’til the birth of the twins in July. By then the pool staff was well aware that two more were on the way.

But noone could believe it when I enrolled Andrew in classes and started showing up with the babies. To swim. I did wait until they were six months old - primarily because I couldn’t find the time to reach the phone and sign up for classes. But they were still in baby carriers the first time we showed up. To be honest, I don’t remember that first time, but I do remember the phenomenal amount of planning, coordination and sheer physical work that went into the weekly operation.

It was like a military maneuver.
Posted by Twintensity at 12:57 AM