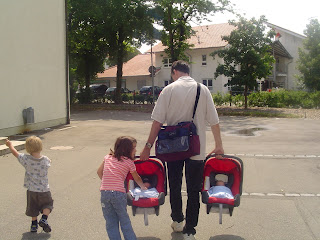 Like I was going to be able to stay away from this one. I feel really close to Brad and Angie, I really do. Angelina has the life I would have liked if I …well, if I had had another life. She gets to travel all over the world, lend her voice to causes she believes in, make movies, look great and have lots of kids. She makes millions, donates one third of it to charity, and looks genuinely happy. What’s not to envy? She was pregnant with her third child, the first two being adopted, while I was pregnant with my numbers three and four. I kept abreast of her in the magazines in my obstetrician’s office; I was having twins, I spent a lot of time there. I really felt we had a lot in common, kid-wise anyway.

Then she and Brad adopted number four and also popped out numbers five and six. Within two years of number three. How the heck was I going to compete with that?

I’m not judging. At least not Brad and Angelina. But I do have a bone to pick with the media coverage they’ve received since the arrival of the twins. (Have they adopted any more since I last looked? Maybe I ought to check again. Oops – there it is – rumors of an impending pregnancy.) The media idolizes Brad and Angelina, their ability to jet set around the world, live in four or five countries, make movies, support the U.N and help rebuild New Orleans, all while carting around and caring for six children, including infant twins. The pictures show them strolling through New York, through New Orleans, through Berlin, looking radiant. Angelina doesn’t even have circles under her eyes. (Although Brad does, God bless him!)

Okay. They have a lovely family and I’m sure they are fantastic parents. However, they are also attending international auctions and movie premieres - and oh yeah, President Obama’s inauguration. Despite the banner headlines that they did NOT have a nighttime nanny, SOMEBODY was watching those kids while they were out together on the red carpet. That’s nighttime enough for me. They also have at least three women - whether they call them nannies or teachers - helping them with the children during the day. Angelina – or Brad – is never out to a doctor’s appointment with all six of them in tow.

More power to them. It allows Angelina to spend individualized attention on each of the kids during the day. And probably also catch up on her beauty rest. Make movies. Generally save the world. You go girl!

But for the vast majority of us, caring for the children, ALL the children, is only one part of being a parent. For most of us, there is also a house to clean, laundry to wash, groceries to buy and food to cook. You can’t tell me that Angelina is mopping her own floors. She has a staff that also shops, cooks, and cleans up after the meals. At least I assume so. I know I would if I were in her position.

Like I said, I LIKE Brad and Angelina. They have my other life. I like them more because I can tell they work hard and put 150% into everything they do, family, careers, humanitarian efforts. And I don’t think they lead easy lives; they live in the fast lane and are just as busy, if not more so, than the rest of us. However, I DO think it is unfair for the media to keep pointing them out as models of parenthood. There’s just no basis for comparison between them and parents living in the real world.

I like the occasional picture of Brad carrying one kid on each arm - by the way, my husband can do that too - and looking absolutely exhausted. It reminds be that under all the hype - and even with all the help - parenting is an exhausting process.

But wouldn’t it be just a little less exhausting if someone put those dinner dishes away for you?
Posted by Twintensity at 7:30 AM