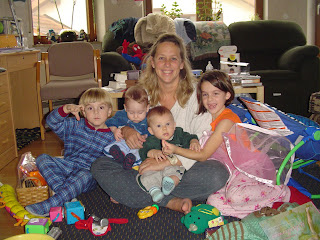 I’ve been doing a lot of surfing on the web, checking out blogs and websites from other moms turned Internet entrepreneurs. Hannah Keeley. Cheryl Lage. Elizabeth Lyons. Elizabeth not only has five young kids, two of them are twins. In between pregnancies, caring for the kids, and caring for the home, they have managed to write books, articles and blogs. Hannah now has her own TV show.

I’m partly envious and entirely curious. I mean really, how ARE they doing it? I don’t want a top ten list of ways to organize the pantry or advice on a three minute makeover that is guaranteed to make you look good enough to attend the Oscars. I know I need to find time for myself, and time for my husband. I can get out the door with twins and I am able to organize a child’s birthday party on a limited budget. I appreciate all the advice girls, I really do, but what I want to know is what is happening with the kids while you guys are writing.

I only ask because mine are either parked in front of the TV set or fighting over the cookies they’ve stolen from the kitchen while I was preoccupied at the computer.

Elizabeth writes that she did NOT have help with any of the first four, numbers two and three being the twins. Not even a housekeeper. She had a supportive network of friends, but most of them had twins as well. Can one really get enough babysitting from friends to write a book?

She also says that she was, and still is, chronically exhausted, hence not one of those people who can get by on only four hours of sleep a night and still function normally. She had twins, she DID get by on less than four hours of sleep a night, I can guarantee it, but how was she then able to write her two amazing books? (They are amazing, even if you don’t have twins, they are funny.)

My husband insists these women must have all had their kids in daycare, but I don’t think that’s the case. And even if they did attend the morning session, someone had to be doing the grocery shopping and cleaning the house, right? I mean, they’re not Brad and Angelina. (Who we will get to at a later date, I promise!)

The only thing I can think of is that they just did it, squeezed it in between the myriad other activities during the day, because they had to, because they felt compelled to, because it was a way to keep their sanity. I heard once that Erma Bombeck said she wrote her books a few sentences at a time while hiding in the laundry room from her kids.

I’d like to hear how these women do it once the kids get older and have afternoon activities. Or need help with their math. You know, when they’re not taking naps anymore and turning “Blue’s Clues” on doesn’t cut it. I’d also like to know who is watching the kids - and Hannah has seven - while they are filming their TV shows or giving a lecture.

I’m not being sarcastic. I really want to know. Because I want to be there for each of my kids and I want to write as well. I want to get the grocery shopping done, the house cleaned, the meals prepared and get everyone to their various after-school activities. I also need to sleep.

I’m going to give it my best shot and see how it goes. Maybe I’ll find the magic answer. My guess is it’s more about giving yourself a break, turning on the TV set every now and then and doing what you want to do, not what you feel you should be doing for the kids all the time. After an hour of doing whatever it is that your thing is, turn off the cartoons and get back to the Play-dough, but go ahead a take the time to do something other than be mom. It may seem like odd advice from women who have devoted themselves to helping moms be better moms, but I bet you that’s part of it.

More useful than the three minute makeover in my mind.
Posted by Twintensity at 9:00 AM