Four at the Pool (Two of Three) 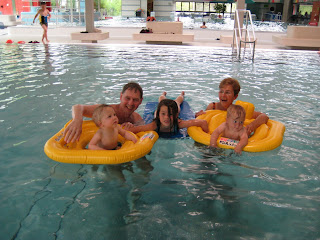 First, the two older kids had to be primed. Honestly, if they didn’t listen, if they didn’t cooperate, it wasn’t going to work. If I had had to hold Andrew’s hand while we were in the parking lot because he was out of control, then we weren’t going to make it out of the parking lot. This wasn’t a threat; it was reality. I told them this. To this day, I still can’t believe that worked (remember, he was FOUR), but they really liked the swimming.

Next, I had to prepare the supplies. This took hours at first. Towels. Swimsuits. Shampoo. Flotation devices - first still for Andrew and later for BOTH twins. Pool toys. Snacks and drinks for the big kids. Bottles with water and formula, later baby food in plastic containers. Diapers. Baby swimsuits. Wipes. Cushioned changing pad - this plays into the logistics later.

Arriving in the parking lot, I would get the twin stroller out of the back, unfold and prepare it - this was a three step process that I don’t even think about anymore . First twin in. Strapped. Second twin in. Strapped. Older kids gripping the stroller to assure there was no temptation to run across the parking lot. Three bags out of the car. Baby seat out of the car and on top of the stroller. (Again, wait for the logistics.) Car doors locked. Into the pool. At first, when they were younger, I balanced TWO baby seats on top of the stroller, but gradually graduated to one and a changing pad.

Once in the changing room, the twins stayed strapped into the stroller while I helped the older two change into their bathing suits and changed myself. (I rolled the stroller right into the changing room.) I used the common locker area - the luxury of privacy has ceased to be mine. I then got out the first twin, changed him and placed him on the cushioned changing pad. (Ah hah, there’s the changing pad!) Again, at first this was a baby seat. Then came the second twin, changed, and placed into the baby seat. Strapped in.

Older child number one then had to wait with baby on changing pad or in babyseat while I walked with baby in babyseat and all our stuff and older child number two into the pool area. The first baby into the pool area was ALWAYS in a babyseat - strapped in - because child number one (usually the six year old, Ryan) then waited with the baby while I ran back for the second set. Swear to God. I can’t believe they allowed it! Although, after a few weeks, when people knew us, there was generally someone willing to help me keep an eye on two of them while I ran back for the other two.

I did the same thing in reverse at the end of two hours. Baby in carseat with older child waiting in pool area while I run with baby two in carseat or with cushion and older child number two (usually Andrew this time) into the locker room, leave baby on floor with Andrew (and a few appalled mothers) watching, while I return to the pool area for the second two. For the first year we skipped showers. The second year only Ryan and Andrew showered. We are up to three of us showering AND washing our hair.

In the pool I kept the twins strapped in unless they were awake and demanding attention and tried to play with Ryan and Andrew. Most of the time one or both of them would want to be fed, and I’d do it poolside. Then one would sleep while I held the other one in the pool - until someone came to tell me that the second had woken up too. People were really very helpful. I think they were in shock. Often someone would offer to hold one while I had the other. We made lots of friends. There was also a baby swim class taking place at the same time we were there and - although I was not allowed to join with two babies and only one parent - I did meet a lot of the mothers and still keep in touch with them regularly. Most of them were first time moms with one child so they pretty much told me how fantastic I was to be managing with four. I needed that.
Posted by Twintensity at 12:00 AM