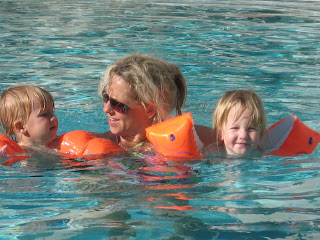 The two hours at the pool were exhausting. I was constantly holding, feeding or caring for at least one, and often two babies. Plus trying to keep my eye on the other two. It got worse when the babies started walking. I still used the baby carrier strategy to get them in there - one in the baby seat and one walking holding onto my hand - or ran with the one in the baby seat while the other toddled next to his sister. I swear, I was fast. And the child left alone poolside was always the one STRAPPED into the baby carrier! God, it sounds awful now.

Once they were moving though I had to carry them both most of the time. Ryan and Andrew got relegated to carrying the bags while I carried one toddler on each hip. It’s doable. If not sightly. It was easier in the water, because I didn’t need to support their entire weight there. I tried the floating rings but they never stayed in them for long. Switched to swim fins at 18 months and haven’t looked back since.

The next milestone was the kiddie slide and learning to walk on the slick surface poolside. I was all over the place keeping up with them - and still they hit their heads way more than they would have if I could have been directly behind them both. One time I fell in the parking lot - bringing down the entire stroller and both babies with me - and I burst into tears just from the sheer frustration of it all. I tried taking a fifteen year old neighbor along to help out, but she told me it was too exhausting after two weeks.

I’ll be honest. I used to dread our swim days.

Two and a half years into it though the work has paid off. The older kids swim well enough that I don’t need to be directly next to them the entire time. The packing process takes minutes instead of hours. No more baby seats or baby cushion. In fact, we don’t even use the stroller. All four kids get out of the car, hold hands crossing the parking lot, and change themselves in the locker room. Of course the twins still need some help, but you’d be amazed. They can walk and slide without knocking their heads on the floor quite as often and they swim almost independently in their swim fins. It is actually a joy to go with them.

Is there a lesson to be learned from the whole pool thing? (Swimming lessons, if you will!) Besides the fact that I am nuts? I think so. It can be done, if you want it badly enough. Whatever “it” is. It won’t always be fun. But it will get easier. And it will be worth the work. It’s easy to say that now that I am past the worst of it. (And I realize that I am sounding just like those perfect “how to” moms I promised not to be.) Reading this through, I can’t believe I did it either.

You do it because you have to. Whatever it is. But if you’re still in the middle of those first two or three years - know that others share the pain, know that others survived just one step at a time too. IT IS SO HARD. People will keep telling you that it gets better - and you’ll be thinking, yeah but WHEN? And then someday you too will be looking back and thinking, I can’t believe I did all that. And you’ll be there.

Until puberty hits and you wish you COULD strap them back into the baby carriers.
Posted by Twintensity at 9:00 AM