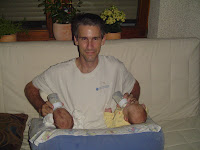 February 18, 2009 by christine steinmann connor
As the mother of twins, I suffer from Baby Bjorn envy, the feeling that hits you when you see the mother of a singleton strolling contentedly down the escalator in the mall while you frantically push your double-wide super stroller down the length of the building to get to the elevator on the other side. On the other hand, I have been stopped in my tracks at the sight of a mother pushing a triplet stroller. Not in the mall, she wouldn’t fit, but just down the sidewalk. Or rather, in the street close to the sidewalk, since she wouldn’t fit on there either.
I had tears in my eyes watching her. You WANTED to be happy for her, but all I could think of was the work it had taken to get all three of those babies dressed - it was winter in Germany - and out the door. And how, even if all three of them were quiet for a moment, that the chances were more than good that at least one of them would be screaming any time soon. Or two. Three. At that point, what’s the difference? And then she was going to have to get them all out of the stroller, probably one at a time, up a flight of stairs, again one at a time, and into a small apartment where she would have to undress each one, while they were screaming, and then change diapers and get ready to feed them. With twins, I had a special nursing cushion, which was bad enough. With triplets she would need those special bottles that sit on the floor with a tube leading to a pacifier attached to the baby. She’d have to prepare the bottles - because, I am really sorry La Leche., but women were NOT meant to breastfeed three babies at once, check out the anatomy - maybe even get a chance to get out of her coat - before feeding and then starting the whole diapering process all over again.
Where’s the fun?
I’ve heard that the parents of triplets don’t remember much of the first two years. Maybe it's better that way. We all love our children, singly, in pairs or in three or more..but if there is one present I would give a parent of multiples, it is one more child. ONE. Because, after all that hard work - and I know as well as you do that there is joy in that work - you deserve a reward. You deserve to stand on the escalator, with your child in the Baby Bjorn, and have a mother of twins stare at you in envy.
Posted by Twintensity at 7:30 AM