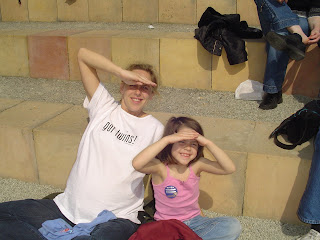 It has lately come to my attention that there is at least one woman pregnant with twins who is following my blog.

My sincerest apologies. You probably shouldn’t be reading all of this yet.

The Baby Bjorn thing is absolutely true. As are the military maneuvers depicted in Four at the Pool. And the exhaustion and the isolation. I think that is why there are so many amusing anecdotal stories written by twin moms; we use the humor as a tool for survival.

When I found out I was pregnant with twins - at eleven weeks, they missed it the first time - I was ecstatic. As I’ve already said, I am a little slow on the uptake. And an eternal optimist. I thought, this is FANTASTIC, I GET to have twins, YAY. Really. Yes, I had some moments of doubt - especially when the reality of buying a new car, and a super-duper, double-the-size, triple-the-cost stroller, and TWO carseats made buying stuff for the babies more stress than fun. But for the most part I felt sorry for those moms who were only having one child and couldn’t
believe how amazingly lucky I was to be having two.

When I was wheeled out of the delivery room, after a perfectly normal delivery at 39 weeks, with two healthy boys weighing in at 6 lbs 12 ozs and 7 lbs 12ozs, my first question to my husband was whether we could do this again. Back in the room, with two other women and their one babies, I sobbed with joy that I had TWO. 24 hours later, after nursing them the entire night while the other moms got to sleep, I sobbed again that I had TWO. But I attribute that to hormones and sleep deprivation.

Having twins is hard. (So is going to the moon or becoming a prima ballerina or just about anything else that is worth doing.) But is it FANTASTIC. I’m going to continue to write about the difficulties - but thank you for making me think of the joys. I don’t want you to go through your pregnancy worried about all this. It is yours to enjoy. And it’s not fair for me to tell you it will be anything but fantastic.

Of course I am DYING to advise you - on what to do with your older child, on which stroller to get, on what I might be able to hand down so that you don’t have to buy it twice - but this is not my pregnancy and these are not my kids. I guess the ultimate question is, would I do it again? I would. Cue in the personal growth stories, the search for finding the person behind the mom. But it’s more than that. It’s because this is really something special, something not everyone gets to have. You are really really lucky.

Of course, I am saying this from the end of the two year tunnel, the two years of madness that parents of multiples only acknowledge - or recognize perhaps - after it is over. A few days ago I was with Aidan and Matthew on the playground, a few towns over so that people weren’t used to seeing us, and it was a shock to realize that people were looking at us more than is usual. Not because I was speaking English to them in Germany, but because the two of them were running up and down the playground together, digging tunnels in the sand, sliding down the slide and exploring the landscape - all the while talking to eachother, working together and holding hands to pull one another up a steep incline.

It’s not always that idyllic - thirty minutes later I was pulling their hands out of one another’s hair - but it was a shock to remember that something that I see as ordinary, every day, is really in fact something quite special.

Welcome to the club. Enjoy.
Posted by Twintensity at 11:56 PM