It's Friday and Ryan has started her Friday morning private riding lessons. 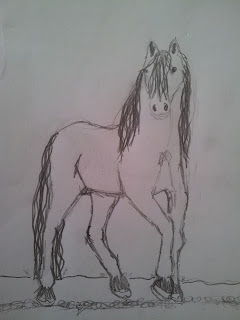 Which isn't to say that it wasn't hard to get up this morning after a week off.  In fact, it was so hard to get her out of bed, it was impossible to get her to eat anything more than a mueslix bar.  And although she was excited once we were there, she was so exhausted and undernourished she almost passed out on the horse.

She did pass out three months ago, also during the holidays, when we just couldn't get her to get up and eat regularly. 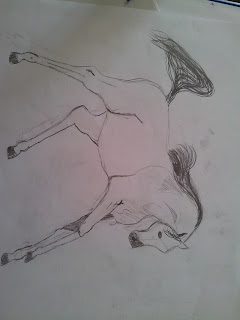 I'm sure it's exacerbated by puberty, but this inability to get into the swing of things - basic things like eating even - if the schedule is off - is not normal.  I will have to spend a week or two getting her back into the routine of schooling after every break.  Even after only one week off, she is sluggish to the point of - well, of passing out doing her favourite pasttime.  It is going to be a constant struggle to keep her going, and to teach her to keep herself going, over the next few years.

I drag her with us on family outings.  They are becoming more and more important to us.  She hates to go.  She won't get up.  She wraps herself up in weird clothes and scarves and jackets.  She brings her knitting and her sketching.  We aren't even trying to pretend she's an average thirteen year old girl anymore!  Who would we be kidding?!  She does come out of her shell, eventually, usually, and is even happy then.  We, her family, are her world. 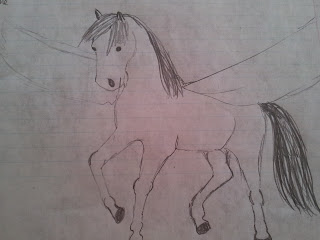 The diagnosis of Asperger's never entered my mind because of the label "little professors."  These people are supposed to be brilliant at one thing.  (It's a steroetype, but what a nice one!)  And I never considered Ryan particularly brilliant at anything.  Certainly not her schoolwork.

And then I watched her ride.  And she is doing dressage.  Okay, she's still on a little pony, but the teacher is working with her on skills I never could get my body to understand.  And she really follows them effortlessly.  She's really really good.  Naturally talented.

Eh, it's not anything noteworthy like Einstein or Spielberg or Gates.  Except she COULD compete internationally as an adult and do quite well.  Professional athlete might not be what I considered brilliant, but it is certainly laudable.

And it takes single-minded dedication and determination. 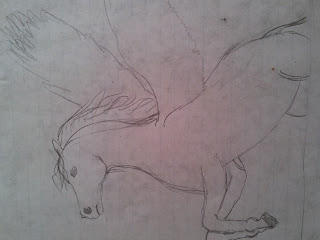 On reflection, she also has a lot more knowledge about horses than I gave her credit for.  It's all just superficial stuff, like colours and markings and breeds, I tell my mother.  But how many people know all that?  I do.  And I know a lot more besides, like all the diseases and the care and husbandry.  Not only do I also have Aspergers, though, I am a veterinarian.  I studied this stuff at school.

I've been comparing her knowledge to mine instead of to the average person.

Ryan doesn't have to be brilliant at all.  But her riding skills AND her equine knowledge certainly register as out of the ordinary. 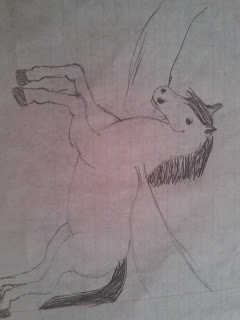 Out of the ordinary.

My child the fairies sent me.  Riding her unicorn.

Posted by Twintensity at 2:41 AM