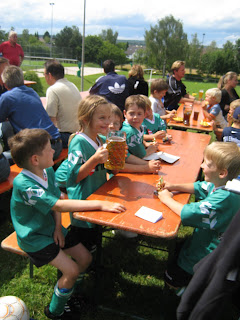 Spring is here and with it the outdoor soccer season. Soccer is to the rest of the world what baseball is to America. As American boys and girls get out their bats and gloves, the rest of us change from indoor sneakers to cleats, pick up the same soccer ball we've been playing with indoors all winter, and head outdoors. This a serious sport; you don't stop playing just because the weather gets cold and the ground freezes up. You move inside, for cramped standing room only tournaments inside local gymnasiums.

German mothers have been bundling up their children in hats and scarves and gloves since October, something about catching cold if any body surface is exposed to the elements after September 30. (Funny enough, the winters here in southern Germany are actually rather mild in comparison to where I grew up in Connecticut; rarely do we have a day below 0 C/32 F) But once the sun comes out, literally days after the hats and scarves are packed away, out comes the sun screen and the brimmed hats. Something about sunburns, although my German father can testify that a German sunburn has nothing to compare with a Caribbean sunburn! My family runs around barefaced and uncreamed, thrilled to finally see the sun again and to feel the warmth on our skin. The Germans think we are nuts - but I have never had a child burn in Germany. It's 50 to 65 degrees Fahrenheit, we're a continent away from the equator; how close can the sun actually be?

I wonder about a people who take cover from the cold AND from the sun.

So when it started hailing last Tuesday, in the middle of Andrew's second outdoor soccer practice of the season, I figured I'd better head out to pick him up. Better yet, I sent my husband. I figured Andrew would either show up at our door, driven home by a parent who had stayed to watch the practice, or we'd find him huddled in somebody's car, waiting for us to come and get him.

Damon called me laughing. They still had half an hour of practice left. Rain-drenched and mud-soaked, the kids were still running drills under a row of trees in order to provide some protection from the hail. After all, it was small hail. And it was soccer.

On Monday I'd had a phone call from a friend, celebrating the fact that our "A" team had won two out of three games last Saturday, soundly thrashing one team 8-0. Never mind that that team was our own "B" team composed of friends and neighobors; no hard feelings, but we'd still kicked their butts. She then proceeeded to give me play-by-play accounts of all three games; including the one we lost 3 -4; along with suggestions on improved tactics and feedback on each player's strengths and weaknesses. Mind you, these boys - and one girl - are SEVEN years old!

My daughter's third grade standardized tests - conducted in all three third grade classes - were postponed a week because the boys had a soccer game during the first scheduled week.

I personally don't enjoy the soccer games. Andrew plays goalie - and while he LOVES it - I can't stand the pressure. I certainly don't approve of the intense competition - the emphasisis on winning - at such a young age.

But I do recall fondly the summer of 2006, when I was full-term pregnant with the twins, and the World Soccer Cup took place here in Germany. Germany's little team - not expected to win - came close, working its way up against more experienced world teams. The boys - and their coach - became national heroes. The coach, Jurgen Klinsmann, came from our southern neck of the woods. And I still wear my Michael Ballack T-shirt to this day. Never mind that the one now coaches for Munich and the other plays for Chelsea, England. For a time, they belonged to all of us.

Screens were set up in squares, in restuarants, and even in the hospital. German flags flew from cars and homes, were worn on T-shirts and on tattoed faces. People smiled. Everyone was united. Germany lost to Italy - on July 4, the day the twins were born. But our third place finish was celebrated with more enthusiasm than France's 2nd place finish was celebrated in France. (They, too, succumbed to Italy.) First place would have been unbelievabely sweet, but it was about more than winning. It was about a community spirit that is rarely seen here in Germany. We saw ourselves as a team, and the rest of the world saw us - momentarily - as a naive, happy, fairy-tale ending.

We need more of those moments. And soccer - known as football everywhere except for in America - provides them.

I'd been thinking of making T-shirts for the boys. "REMINDER: My children will grow up to pay your retirement benefits." But now I've got a better one. "PATIENCE: One of these kids could grow up to win the World Soccer Cup for Germany."

It might be Andrew Connor, or Orazio Sortino, or maybe even Ghazi Al Aani. (The best player on Andrew's team IS of pure German descent - and also a girl.) More essays in the last line - and I promise, they will follow!
Posted by Twintensity at 12:02 AM