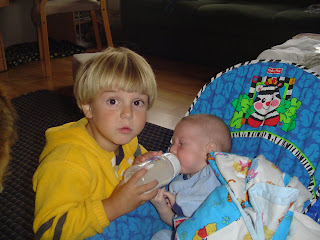 My God, you find out someone you know is pregnant with twins and it is actually painful NOT to offer advice. It's well-intentioned; why have her spend three weekends looking for a twin stroller, and another on car seats, when you've already done the research and figured it out? You 've already read the books - and in retrospect figured out which advice to heed and which to ignore - so why not share this vast wealth of knowledge you've accumulated?

Don't worry. I know why. It's because, like anything else in life, everyone has to find their own way. I found the 500 Euro stroller small enough to fit through a single door and manueverable enough to take off-roading, but you may want to fork out the 1200 Euros for the Urban Duo - let's face it, I still do a double take and stop to admire one whenever I see it, kind of like my husband checks out classic automobiles.

The "stuff" is the least of it. The rest you will also read in books and on websites - the schedule keepers to keep track of feedings, the pros and cons of dressing the kids alike or not, blah, blah, blah, blah,blah. One could write a book about it - and so many have - that it is really NOT worth repeating here - in a blog that is SUPPOSED to be helping you MAINTAIN your sanity!

Two things you'll read and hear over and over. And you won't believe them until you've been there yourself. And then you'll repeat them to other future twin moms who will most likely not believe them either. But they are worth repeating. And maybe if you hear them often enough, you'll at least want to believe them even if you can't quite bring yourself to do it yet.

The first is that you too will wake up one day after the twins are two to three years old and realize you have made it past the hard part.

You're not going to believe it until you are there but you too will wake up one day after the twins are two to three years old and realize you have made it through the hard part. (Did I mention it was worth repeating?!)

The second is hard for me to bring up. Only because I promised myself not to preach. And also because I really didn't listen to this one myself. HELP! As in, get it. I think twin moms have it tough because, let's face it, with triplets NOT getting help is out of the question. But with twins, we're still on shaky ground. One COULD do it alone - and many do. And I, for one, felt I should be able to.

So I'm not talking about help as in a nanny or a nighttime nurse, even if you can afford it. Because that is a personal decision in any case and because I think the form of help is going to differ for everyone. I'm also not going to suggest finding time for yourself - because for the first six months I was totally content to immerse myself in the kids and to think of nothing else. Why should we feel pressured to be MORE than a mother, at a time when mothering is challenging - and rewarding enough - in itself? Others will need time alone at the mall, or an evening out with girlfriends - although my guess is that what most of us wanted those first six months was sleep.

1. Cleaning lady. I lasted three months without one. After that I had someone come once a week for the first year. I did it myself again the second year, again this need to prove I could do it alone, and now have someone come every other week. It's a luxury we really can't afford - but on the other hand we can't afford to have me lose my mind either. And a sparkling home every other week - even for only a few hours - keeps ME sane.

2. Daycare. It really helped me that the older two were in kindergarten and first grade respectively. It didn't seem like enough - they only go from 8 to 12:30 here in Germany- but it gave me time to devote exclusively to the twins. My big dark secret is that the twins started morning daycare early too. They are now in a morning "kindergarten" group for two year olds and will move to the regular German kindergarten (for three to six year olds) for four hours in the morning starting in September. There are endless debates on this - with more material for another blog entry! I did it for ME as much as for the twins.

3. Getting out. Definitely a personal decision, but for me, it is easier to be outside somewhere with the four kids than it is to stay inside in a cramped apartment. Plus, I get compliments and admiration for my fantastic mothering skills from strangers who don't know I was pulling my hair out and yelling at the kids to get into the damn car NOW please, on the way there. The kids are happier, I am happier, and the afternoon flies by.

4. Flexible husband hours. Not everyone can do this, but it certainly DOES help if dad can be home in time to help with dinner and with getting everyone to bed. OUR Dad works from home since he was laid off when the twins were six months old - with lots of cons but some pros - but we have used this to our advantage. He is able to help take the older two to music class for 45 minutes on Mondays and Andrew to soccer for an hour on Wednesdays. All little things that add up to a lot. If Dad can't do this, find some neighbors to help - you will be amazed at how many people are willing to help - especially if they are driving there anyway with their kid - if only you ask.

Like I said, I didn't listen to a word of this when I had my twins. (Have I mentioned that I'm a slow learner?!) Especially that part about asking neighbors for help.

You too will wake up one day after the twins are two to three years old and realize you have made it through the hard part.
Posted by Twintensity at 12:00 AM

Labels: cleaning lady, daycare, getting out, help with twins, husband