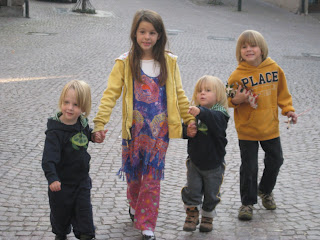 "Those definitely aren't all YOUR children." This from the lady at the entrance to the indoor children's playground we were visiting for Andrew's 7th birthday last week. But yes, they were - all four of them. As the lady glanced at me with mistrust - she wasn't sure she wanted to give us the free entrance for a fourth child that the family promotion promised - I patiently explained that, although they weren't identical, Aidan and Matthew were, indeed twins, thereby trying to alleviate the confusion with having two children so close in age they couldn't possibly both be mine.

I've been getting that more and more recently; unless I dress them identically, Matthew and Aidan look like siblings maybe, but not like twins. Except they are obviously very very very close in age - closer than many suspect. Twelve minutes close in fact. A lot of people assume I am taking care of a friend's child. This doesn't bother me at all, why should it, but I was beginning to get annoyed at having to prove that all my children are indeed mine.

And then I saw her glance suspiciously at Ryan, before sighing and giving me the discount, as if she couldn't force the truth out of my and had to reluctantly relent. My dark child. So it wasn't about the twins after all. It was about Ryan again. Fortunately Ryan was already excitedly talking to Andrew about which play station to hit first, so she missed the exchange - and the look.

I used to laugh but this time I couldn't find it funny. It's been happening more and more often.

Let me explain. Ryan looks EXACTLY like her father; spitting image in feminine form. Friends of his still freak out when they see even just photos of her. She's a perfect mini-Damon. Beautiful long brown hair, big doe-brown eyes, lanky limbs. She's by no means dark, or at least by American standards, but her looks belie the melting pot of America - maybe Italian, possibly Albanian, but just as likely Irish or German - my father has dark hair too. (But blue eyes.)

The boys - and I - are blonde. Andrew has brown eyes. Aidan and Matthew have blue and green - please don't ask me which has which right now. But they are blonde. I don't know that they look like me any more than Ryan does, in fact I think Matthew also resembles Damon, but they do match - me and each other - colorwise.

Last week I caught the tail end of a conversation where Ryan was defending herself from two girls her own age who refused to believe that she was part of our family. (Before we go there, the girls were actually dark themselves and were not German.) "Those are not your brothers," they said. "And where is your mother really?" When I stepped in - because Ryan looked really hurt - their eyes grew really wide. This blonde lady was actually telling them the dark haired child was hers.

Even before the twins were born, strangers have wondered aloud about how odd it was that two children from the same two parents could look so unlike one another. Chinese tourists have taken photos. And once a complete stranger asked me, in front of the children, if they had different fathers. Or rather, stated that it was obvious that they had DIFFERENT fathers. In front of my children.

I explain about the American melting pot and the wonderful variety of genetic combinations. But really it's getting old.

This week I spoke to a Chinese-American mother living in Germany who told me how tough it had been for her Chinese-American son to grow up looking different from everyone else. And I constantly hear - and see - how tough it is to be just a little darker than everyone else in Germany. This is not America; a LOT of us are blonde. Sure, we have our influx of eastern Europeans, Italians, Turkish, and every so often an African- American serviceman or even an African. The face of Germany IS changing, but it is still light years behind America.

I know that racial relations in America are far from perfect. But I see the ideal realized on the U.S. military bases here in Germany. - an institution I am less than comfortable with embodying the vision of a unity I love. 1/3 white, 1/3 Hispanic, 1/3 African-American. Hispanic women in positions of authority. It takes a while to get used to the unifrorms - and the weapons - but the dream of a melting pot is realized, at least on the surface, on a U.S. military base.

But how can this be about racial relations? My children aren't even mixed race. It's about looking different- and about having to prove WHO you are - and validate your basic being - because of how you look. So maybe it is about race after all.

These are ALL our children. They have survived flood and famine, corrupt regimes and civil wars and crippling poverty. Haven't they been through enough without us questioning the color of their skin?
Posted by Twintensity at 12:01 AM