One of the greatest things about being middle aged (and having a baby)  is that I get to have friends way younger than me and friends way older than me.


"You're not even my YOUNGEST friend," I remember telling Bobbi.

"Yeah, well you're certainly my OLDEST!"  she replied.

Cheeky.  You can see why we're friends.

Merle and I are soulmates.  She's older than MY mother, but she's not my mother.  We have a privileged relationship without that strain of maternity.

As a bridge between generations, I feel obliged to share what women learn as they get older with the young ladies out there.

It doesn't get better than this.


I am doing my best to raise young gentlemen, I really am.  But they have the emotional growth of six year olds.  Granted, two of mine ARE six but still, there is only so much a mother can do with what genetics and sex have already predetermined.   It starts with testosterone dominance in the womb, call it XY dysfunction if you like.

I reran Whitney Houstons' Cinderella the other day.  The one with Brandy as Cinderella and that really cute Filippino Prince.  After getting sidetracked with how interesting it was that a black mother and a white father could have a Filippino son....

"Maybe they adopted," someone suggested.

"Whoopi Goldberg can do anything," I replied.

They weren't worried about the interracial family, just trying to figure out the genetics involved.

While I was trying to show how a man should treat a lady.

"No, like a person.  With dignity and respect," answers Brandy /aka Cinderella.

Of course, by that time the boys had already lost interest and were in the playroom fighting with swords.

Matthew did come out at one point, near the end, to check and see how things were going.

They both stood in silence before the telly, mini maces and bludgeons clenched in their fists. 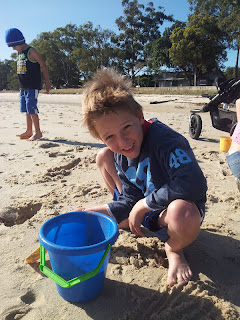 "I think it's going to fit her,"  Matthew finally breathed in relief.

"It is.  It is." replied Aidan with excitement.

They both turned to report to me.

And ran back into the playroom.

I just don't think they get it.