There are days when everything seems to come together. 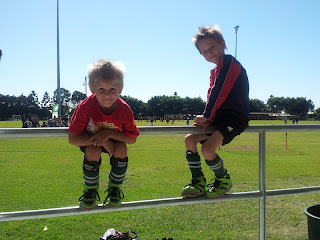 Aidan and Matthew's first grade class prepared a skit on valuing diversity.  (Imagine Elmer Fudd stumbling through "We value diversity.  We are caring, inclusive and tolerant." and you will get an idea of what they sounded like but I still love this school, officially our old school now, for just these sort of values.)

Ryan was recognised for a piece of artwork she did based on the cover from "Twilight." 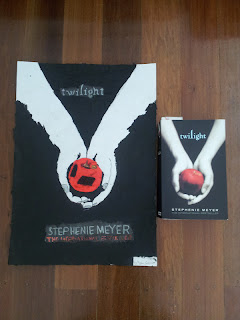 Andrew wrote the script for the Optiminds performance that got Lawnton State School the highest award it has ever received, Honours.

All of us got to touch an Olympic medal, won in the 1996 Olympics in Atlanta, by Daea Wolfgramm, in boxing, the first person from Tonga, the first Pacific Islander at all, to ever win an Olympic medal.  His son is in Andrew's class at Lawnton, having moved here from New Zealand the same week we did.

And I got to enjoy the Lawnton school community for what it is, for what it was for us two years ago and for what it will continue to offer to the community.  (Diversity IS a huge part of that, having spent most of the morning tea with friends from all over the world.  Five years, mates, trip to India, all of us!)

It wasn't a perfect week for the school.  Three suspensions.  Curse words written on the bathroom mirrors.  Swearing and roughhousing in the courtyard.

But having made up our minds to leave (the enrolment process at Kurwongbah consisting of me trying to calm down a sick baby and finally having to whip out a boob in the middle of the whole thing!) I can now appreciate what Lawnton does.

It brings hope and opportunity to a community that wouldn't have them otherwise.

It does an amazing job with at-risk kids, with at-risk families and with kids with severe behaviour problems.

It is the school Jesus would have attended.  (Academic and athletic excellence aside, he would have been lecturing the local private "Christian" school around here for their lack of tolerance and compassion.)


I will miss the Lawnton community.  It taught me everything my "Peace Corps" experience didn't:

To value and accept another culture or socioeconomic group for what it is.

To have hope that, given the proper opportunities, this culture can solve its own problems.

To accept that these problems aren't mine to solve,

That these problems will always exist,

That all you can do is lead by example and give tools to those that ask for them.

Being a part of the Lawnton community, being accepted as a part of it, made me realise who I am, what I stand for, and where I belong.  I am Lawnton because they let me in.  But I am leaving because I can.

Both Buddhist and Hindu belief say that your children were given to you for a reason, that your children chose you to parent them.  I can give Ryan a liberal, fine-arts based education at home right now and so I should.  Her gentle spirit chose mine to protect it.  I can give Andrew the opportunites to meet other children who shine as he does and so I should.  I can give all my children exposure to arts and literature, music and drama, sports and...oh heck, who am I kidding, all the boys want is sports anyway!   (During his enrolment interview, while I was trying to convince the deputy principal to place Andrew in the gifted and talented program, Andrew suggested that his best talents lay not in maths OR creative writing, but on the soccer field!  I'd still like him to have something to fall back on though just in case World Cup Australia DOESN'T work out!)

I was angry at Lawnton, not for being what it is, but for forcing me to choose to leave when all I really wanted to do was stay, stay, stay in one place instead of row, row, row to another.

My strength lies in my ability to change my circumstances, not accept them.

And so I leave you, not with ANOTHER analogy about going where the current leads you, but with the promise that my kids will find better ways to express themselves than I can, that I will lead them where they need to go in order to become the people they were meant to be.

These kids chose me for a reason.


Perhaps being their parent is more important than anything else.

Posted by Twintensity at 8:02 PM