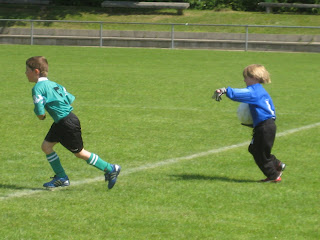 "Ballack? You're wearing a BALLACK T-shirt?"

(I like to think the jovial mockery erases the fifteen year difference in our ages.)

"Yeah, Ballack." I answer. "Seems to have been forgotten pretty quickly, don't you think?"

"Nothing wrong with Lahm, though, is there?" he replies.

"No, nothing at all wrong with Lahm. I just think they dropped Ballack awfully abruptly."

(Four years ago the man was Germany's golden boy. It was more than mildly disconcerting that my obstetrician in Tuebingen looked just like him. Good times, those.)

"You don't think the German team is doing well without him?" he asks.

"That's not the point. They're doing fantastic."

"But you're not going to root for them without Ballack."

"Of course, I am. I just don't understand where he is."

(This bothers me, really. Not just the Germans, but the Europeans in general seem to forget individuals awfully quickly. In the USA, they'd at least let the poor guy sit on the team bench and watch the game. Where is the loyalty? Or is this whole emphasis on the individual really more of an American concept? But oops - I promised more dialogue and less moralizing. It's probably just a soccer thing anyway!)

"What do you mean, where he is?" my young friend asks me.

"Well, for example, they've given his number away already."

"The new guy playing. The 20 year old. He got one of the goals against Australia."

"Oh. Mueller." He seems pretty impressed I'm paying attention to all this.

"So. You don't think that's awfully quick? To take the man's number away already. Last month, before his injury, he was still captain of the team."

"Nobody is irreplaceable." he replies.

And it doesn't seem to bother him.

"Anyway, I'm not going out to buy another jersey, when I've got this one already."

That, however, floors him.

HE may be invisible, a has-been with an injury at the age of 34, but I am like an elephant stopping traffic whenever I wear his name.
Posted by Twintensity at 4:56 AM