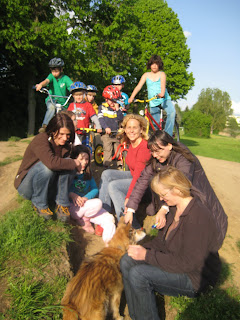 We were on our way to Ollie's baptism on Sunday when Damon popped the question.

"If you could change anything about your past, what would it be?"

Damon's just received his FBI clearance, after four months of waiting, and is practicing interview questions.

But I was already thinking, seriously thinking about what I would change, if given the chance.

Every choice I've made has led me to where I am now.

And I'm pretty okay with that.

And that's okay too.

I am a better person because they were there for me in the past.

That's enough to be grateful for.

Sometimes it seems to me that highschool keeps repeating itself. The venue changes, but not the content. The best part about it is - besides the fact that I'm LEGALLY AND MORALLY ALLOWED to be doing the things I was doing then anyway - that I get to change who I am, and how I respond, everytime the highschool scenario repeats itself.

I didn't think people understood me in highschool either.

But at least this time around I understand myself.
Posted by Twintensity at 11:46 AM