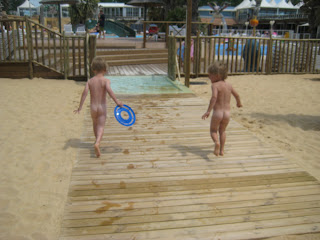 For those of you who see Aidan and Matthew regularly, you will have no problem identifying the twin on the left from the twin on the right. It's amazing how two beings conceived, carried and born at the same time can look so different. Besides both being boys. And there will be no comparisons made there.

All jokes aside, I feel really lucky to have been blessed with twins. I'm an adventurer at heart, a seeker of change, and I honestly wouldn't have missed this special adventure for the world.

How many people get to experience this?

Twins are special. They light up a room and make people smile. In any language.

So that it really does come as a surprise when they light up a room and make people smile.

Yes. Yes. GERMANS TOO! I'm telling you, I can take center stage at the Breuni Mall any day. Young mothers - two year old in the stroller and newborn in the Baby Bjorn, looking slightly harassed and totally exhausted by their own ordeal - walk by and almost cross themselves when they see my four lined up on the bench eating their icecreams. You see them counting. "One. Two. Three. Good Lord, that poor woman has FOUR of them!" They run on quickly, afraid my fertility might be contagious!

But I get plenty of comments and pats on the heads too. Comments for me. Pats for the kids. Men too. Okay the men DID used to cross to the other side of the mall when they saw me coming - eight months pregnant and one kid on each hand - but those were the younger businessmen. Like they thought I was going to walk up and pin the blame on them. "Congratulations. You've just won yourself a full-grown family!" Quick. Run. Hide.

But the older men - 50s or so - get a big kick out of us. Let's face it. The boys match. All three of them. We look good. The three ring circus on its best behavior.

People used to try to hook me up with other twin moms too. I remember one time, I was feeling particularly grumpy about the lack of double-stroller access to Ryan's ballet class and running after two one-year olds heading in separate directions. And a very well-intentioned lady mentioned getting me together with her friend with twins. And I thought - "yeah great - this is what we really need. Two of us with FOUR one year olds. You suck. What a crappy idea."

But I was tired. She meant well.

(For the record, now that the boys are older, we ARE hooking up with more twin moms; we have two sets of twins that make up the four man T-ball team so far and there are a couple at the local pool. Seems they can't stand to stay inside either!)

Being center stage can get old. Especially when everyone else knows a better way to do it. Like they did with THEIR twins, right?! Don't go there. I have never been given advice by a twin mom - or offered any myself. Other than: WHATEVER WORKS FOR YOU. Twin moms don't judge.

But it can be fun too. Like the time in Mallorca when the boys were 10 weeks old and all we heard were shouts of "gemelos". They couldn't believe we were there with TWO newborns. Like it was any easier at home than at the beach.

And in Italy, when we took the kids out biking, me bringing up the rear with the 10 month old twins in a tandem bike carrier. You'd hear. "Uno. Duo. Gemelli. Gemelli." The circus was in town.

It's sneakier now that the twins are older and dressing themselves. Their sense of fashion is entirely different. So that you leave folks guessing as to how close in age those two really are. As if I intentionally gave birth to two beings three months apart somehow. (All that worry about whether you dress em alike or not; c'mon, they wear what they wear and sooner or later they choose on their own anyway and end up wearing a spiderman costume or police outfit most days of the week.)

So that it's more and more fun to see them becoming individuals.

My children are great.

Sometimes it just takes a stranger's smile to remind me of how lucky I really am.
Posted by Twintensity at 10:22 AM