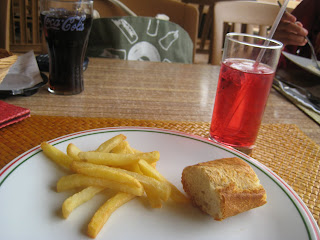 No really, you gotta see the sheepish looks on their faces when the French realize an American has caught them in a Mcdonald's. ALL of them. They're generally packed.

The one in Annemasse had lines out the door, standing room only. Seems like noone else could afford to eat in Geneva either.

Ordering in a foreign McDonald's isn't as easy as it seems. You remember the conversation between John Travolta and Samuel L. Jackson about "Le Big Mac"? Classic. And true. But the problem actually isn't so much the DIFFERENCES as it is the similarities. Are we calling them Kids Meals or Kindermenu? Is it a chicken nugget or not? Mostly it's in English. Which - when you are trying desperately to think and converse in a foreign language - is sometimes harder than you think.

The counter person of course thinks you're a total idiot for not knowing how to order in your own language, but what the hey.

We were in Lyon - which I LOVE so much and where the people were SO friendly and engaging that I am really thinking I have GOT to give Paris a try after all - when I realized with a start that we were, once again, reduced to a hunt for the Golden Arches. No way. But it was late, the kids were hungry, the walk was long and all of the "restaurants" along the river were only serving alcohol.

I saw them too, the Golden Arches, tucked on one corner of a large intersection that fortunately also boasted a choice of two kabob shops. Middle Eastern food. A fair, cheap and easy way out. Kabobs it was.

Note to English group. We were not given utensils. In fact the owner looked fairly disgusted when my Mom asked for a fork and almost apoplectic as he watched her use it to tear apart the kabob. And the SERVIETTES were a paper towel roll placed in the center of the table.

I'm telling you. Feel right at home in France, I do!

Still do have an issue with the meat though. Except for the burgers at McDonald's. I mean, really, THIS is the culture reknowned for its cuisine? Maybe the sauces. Because the meat is so.....so....I don't know.....NOT like American beef. I guess it's obvious, but for those who don't know. DO NOT. I repeat. DO NOT order a hamburger in France. Just don't go there. Although I can't really offer you much of an alternative either. Those Chipolatas the butcher kept trying to push on me. Really? Those weren't just things you HAD to eat during the war?!

The bread is good though. And the French fries. Which come with everything. Appears the French haven't heard of any other sort of vegetable yet. How do they stay so thin? Oh yeah. The meat. Matthew was in heaven though. Plate of fries with some bread on the side, merci beaucoup. Today he ordered a burger at Andrew's baseball game, minus the meat. Two Euros for a white roll. Thanks buddy.

And now that I've completely mocked their menu, I have to tell you how much I love the French again. We did end up at a McDonald's in Mulhouse. Long car ride, hungry kids, not a kebab house in sight.

The little old French lady who stopped to admire the kids was so excited to practice her German on us, that I had a hard time convincing her to let ME practice my French on her. Seems she had been a nanny for two little girls in Freiburg, once upon a time. French woman speaking GERMAN willingly - and happily. One more myth shot down.

Then, as I walked down the stairs with Aidan and Matthew, another Frenchman, first generation probably via West Africa, saw us and wished us a "Good Afternoon" in English. So here's the French - supposed language snobs of the world - speaking TWO foreign languages with my family in the course of one small McD's meal.

Lori tells me its an NYC/Paris thing. And I know New York. They're not rude so much as they're, well...they're NEW YORKERS. It's just their way.

My first minute out and about in Lyon - walking the dog while the rest of the gang checked into our hotel - I get stopped and asked for directions. Really. And got to - fairly fluently- say "Je ne sais pas. Je suis tres desole. Je suis une touriste." as the guy laughed with me at his mistake. Do I LOOK French?!

No. I just look approachable.

And I'm still going to go with that.

I think I can do Paris. If all else fails, I'll just look for the Golden Arches!
Posted by Twintensity at 3:21 AM