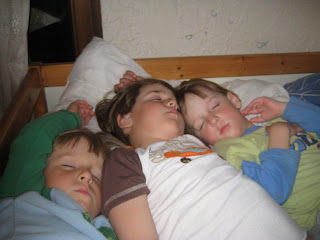 1. Met angry, rambling mother in parking lot and couldn't get away for 40 minutes. (Note: Did not help her with any of her problems since she never stopped long enough for me to get a chance.)

2. Arrived 30 minutes late to yoga class, expecting to at least catch the end of it. (I NEED my yoga class!) Substitute teacher; class packed; didn't dare go in.

3. Bravely headed to the cardio machines. (Yuck!) Did cardio for one hour.

4. Without the headsets working.

5. The men's sauna was broken so that we had a mixed sauna again. No matter how young and muscular those guys were, was NOT in the mood to sit naked with them and sweat.

6. Dropped glass bottle of expensive cream on the floor.

7. Need I mention it shattered?

8. Changed into lounge-around-the-house-clothes, figuring it was really better NOT to attempt communication with the outside world for the rest of the day.

9. A neighbor stopped by to discuss what we are going to do about damages to our VW. (An elderly friend of his ran into it last week, and the repairs are going to cost more than the car itself is worth. Although the car still runs fine, we are selling it in two months and need to figure out how to get some value out of it.)

10. Realized my T-Shirt was see-through - and I was braless - in the middle of the conversation. Tried casually crossing my arms, but wasn't fooling anyone.

12. Aidan and Matthew took advantage of a phone call to Lori to put on their bike helmets and run away on their Laufrads, after I expressly told them not to.

13. It has been 50 degrees Fahrenheit out all day and rainy. Forecast for same.

14. A mother from the kindergarten stopped by to return the book we had given her son for his birthday on Tuesday. He has it already. Yeah. Now I get to return it.

It's only 6 PM. But I'm still frightened of what the rest of the day might bring.

15. France lost to Mexico, nothing that personally affects me, but certainly something unexpected. (I LOVE France but their soccer team plays dirty. Good for Mexico!)

16. Friday's soccer matches were a bust though. Sobs for Germany.

Although I'm sure the upset of most of Europe's soccer teams can't be my fault alone, I still hope that Slovakian player isn't permanently injured.

Feel like I should at least send him an apology if he is!
Posted by Twintensity at 3:53 AM