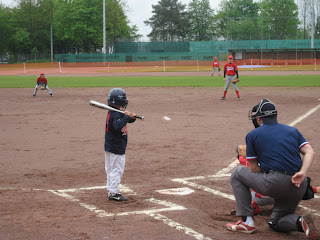 I really do love the World Cup.

Understand that, as an American, I didn't even realize they HAD a World Cup for soccer until a few years ago. And cared even less.

And those boys - the German team - waited with me. (I wasn't on speaking terms with two inside of me anymore. This was MY body - it was time to GET OUT!)

Germany itself came alive that summer too. And presented a whole new image to the world. We were cute, and naive and charming. The world loved us.

And we loved ourselves. Suddenly, it was okay to hang the German flag up again. And hang it out of your car. And stick it to your face. And wear it. We were allowed to be proud, allowed to be happy about who we were.

"Geschichte," they wistfully tell you when you mention that we should be able to do this more often than once every two years. (Four years for the World Cup and two for the European Cup.) "History." Why Germans don't display their flags like people in other countries do. Why they are always a little embarrassed - and apologetic - to show any amount of national pride or spirit at all.

Well good Lord, if the Americans and Brits can fly our flags, right?!

The thing is that Germany scares us more than most because it is so recent, and because it reminds us of what we, ourselves, are capable of. It's not the destruction of the native Americans centuries ago or the imperialism of the British over India. It's not slavery and its not apartheid. And it's not dark-skinned, Africans in Rwanda slaughtering eachother with machetes or Muslims battling it out in the Middle East or Eastern Europe.

It's not the black man, or the yellow man, or some remote tribe far away. It's us. It is white, Christian people from one of the most highly developed countries in the modern, Western world, a country that brought us music and art, literature, science and technology. It is US, systematically slaughtering people who weren't all that much different than us - but different enough apparently - only three generations ago.

Two years ago I watched the European Cup games with other patients in the psychiatric ward. The common room was filled with all of us, Turkish and Polish, German and French, schizophrenic, bipolar and suicidal, drug addicts and alcholics, teenagers, men, women and the elderly. And we got together to watch the games. It was really nice.

Today the Internet - and facebook - binds us more closely than ever before. And my multi-culti circle of family and friends can choose their battles. We had the Olivo's over to watch the South Africa/Mexico game this afternoon. Omar is Mexican-American. Tracy is British. But I have a big, soft spot for Anita, and Lynn-Ann and Liesl and Beulah and their families who have had to leave their beautiful homeland of South Africa because of political and economic strife and frankly, just plain violence. It's okay - Tracy and I were just checking out the players anyway. Good-looking African boys versus good-looking Hispanic boys. It really doesn't get any better than that!

And Sunday.....family histories collide as Germany plays Australia. Although I've already pulled all the boys to my side with generous applications of face paint and a cool Michael Ballack T-shirt. Let's see Damon paint the Southern Cross on Ryan's face and see how long she roots for Australia!

But see. It's fun. More so than the Olympics (C'mon - does ANYONE really watch the Olympics?!) the World Cup draws us all together for a few months every four summers.

The flags are out again in Germany. And we're rooting for our boys.

"Geschichte" is not forgotten. You want to talk about forgetting history, take a look at Somalia or Nigeria. Any idea what atrocities are going on there, RIGHT NOW? "Geschichte" should not be forgotten.

But the world can only move forward together. We all need a sense of who we are, as a country, and as a member of the larger world community.

But it's nice to see the flags in Germany again this summer. And nice to see us smile and root for something TOGETHER, as a country and as a community of people.

It's what we got. And if a bunch of boys chasing a ball around the field brings us closer together, well maybe, just maybe, we can work together on some of that other stuff too.
Posted by Twintensity at 12:31 PM