Nature versus Nurture : THE BOYS! 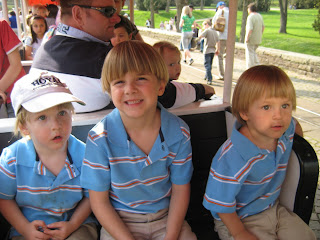 Believe me, I do know SOMETHING about dogs. I studied for 8 years to become a veterinarian and when I tell you, in casual conversation on the playground, that some breeds of dogs are more temperamental than others or that sport dogs require a lot of time and attention and probably aren't the best dogs for a mother of young children to acquire, just take it for granted that I was probably paying SOME attention in school and in the years of practice prior to it and afterwards.

Do NOT tell me that dogs are just like children. And then proceed to lecture me on raising them both properly. While you smugly stand there with your one three year old and a baby who hasn't learned to walk yet, let alone answer back. Honestly, it does NOT make me want to be your friend. Let's talk again in ten years. Or not.

Let's maybe also assume that I've also learned at least SOMETHING about raising children in ten years of raising them.

Having Andrew - and then the twins - has taught me more about genetics than any of the courses I took in college or veterinary school. Three year old Aidan is racing around the BMX track on his mini-bike, taking turns with and accepted by the seven year olds also on the track, while his twin, Matthew, clings to my leg and cries because his bike tires got muddy and he'd like me to help me clean them off. No sorry, really desperately NEEDS me to clean them off.

What do you think I did - enroll one in a course on self-confidence while teaching the other one proper hygiene? I can't say I am raising them identically - I am responding to their individual needs based on their very individual personalities - but I don't think any environment can be more similar than that shared by twins.
And they are still turning into two separate human beings.

I personally wouldn't want it any other way. Do we need any more cookie cutter children? Do I WANT my kids to be perfectly boring imitations of perfectly boring adults? No thanks. I leave that to you, dear friend on the playground. Your daughter is a delight and a joy. What a shame you seem to feel the need to pattern her on some out-dated perfectly mundane role from the fifties. I'd be curious to see her in ten years, to see if you really do 'nurture" the sparkle right out of her eyes, patterning her smiling lips into a hard, straight, no-nonsense line like yours.
Or was her personality predetermined? I'm rooting for the genes on this one.

let's now assume that I am keeping up with my medical journals - or at least a health column in Newsweek and an occasional article over the Internet - and have read something about epigentics. I know it's hard to believe the mommy journals don't hold my interest anymore but this epigenetics thing is even better than the latest theories on early potty training. (I'll clue you in, they ALL go through it, they ALL learn it.) Epigenetics is the science of how the environment our genes reside in - ie, our human body and its health and diet and stress levels and well, just about everything - influences the activation and expression of our genes. As in, you may carry the gene leading to a higher propensity for lung cancer, but the gene may or may not be activated depending on the lifestyle you lead. Don't smoke. Eat right. Exercise. Be healthy.

I like to think I did that epigenetics thing with Andrew - and I am doing the same with Matthew now. Andrew was a little monster for the first two years. I honestly worried that he might be a serial killer or a rapist when he grew up. I mean, he was just so miserable. And, despite the constant criticism from others who knew better, there was nothing I could do in the end but accept him as he was and let him cry. Honestly. Famous last words from my father. "Oh stop pampering him and just put him in the car. There is no way a three month old can cry that hard for two hours." Two hours later Andrew was still crying his head off and my father lost his bet. Kind strangers at the barn in Switzerland where Ryan was taking riding lessona (at the age of three!) almost insisted on driving us directly to the hospital because they also truly believed that no nine month old could cry that hard, that long (also just over two hours), that consistently without there being something seriously medically wrong with him. The child was obviously in pain. I promised to come back if he didn't stop on the walk home - and sure enough, the minute he realized he was getting what he wanted - he stopped. At Christmas-time we were kindly asked to leave a party- and a children's party at that - because noone could stand it anymore. Again, stopped the minute we stood on the other side of the door.

Obviously the pediatrician also blamed me for his poor sleeping habits. Older women on the bus criticized my lack of compassion. My father was sure it was due to my coddling, even after the two hour car trip from hell. And I proudly take full blame and responsibility.

Because that child, that nasty, unhappy, screaming monster of a child, is now a bright, glittering ray of sunshine. I didn't reprimand him, punish him, set expectations that he clearly wasn't going to reach, only to force him to fail and feel defeat. I didn't withdraw my affection in shame at his behavior or to prove to him that he only deserved it if he behaved "properly", by which of course we mean the way I wanted him to and the way society expected him to.

I just accepted him and loved him. It wasn't even that I was patient - I honestly didn't expect him to change. But the right environment, accepting who he was even when he wasn't the way everyone else expected him to be, loving him at his worst instead of criticizing and condemning him for it, gave him the self-confidence to become the young man his is today, and the young adult he will be in the future.

At least that's my theory. And I have the chance to test it again with Matthew. Although Matthew isn't the monster Andrew was, he has his own set of challenges and his own special needs and insecurities, as the dark child to a golden twin. Don't get me wrong - they both have blonde hair and light eyes (one set blue and one green) but Aidan walks into a room and lights it up the way Andrew does. And Matthew, God bless little Matthew, but he can be a little mean and domineering. What a nightmare to have a brother like Aidan, exactly your age, whom you are constantly compared to negatively.

And so I encourage Matthew to develop his own friends, to find his own activies and unique interests. I accept him for who he is, not as an imperfect copy of his brother, well both brothers actually, but as a unique little guy with unique worries and concerns. And tell him he's just fine - just perfect really - the way he is.

The world was made for Andrews and Aidans. But it's going to be Ryan and Matthew who make it truly interesting.

I'd like to take a little credit for it in the end. After all, I did contribute half the gene pool, carefully select the other half (mostly for his possession of a half full bottle of Haitian Five Star rum but the less said about the selection process the better) and then provide the correct epigenetic environment for those genes to express themselves in.

Go ahead, friend on the playground (and I do use the term loosely), teach yours to sit and stay. I'm taking mine to play frisbee.
Posted by Twintensity at 9:57 AM