Have A Hairy Christmas 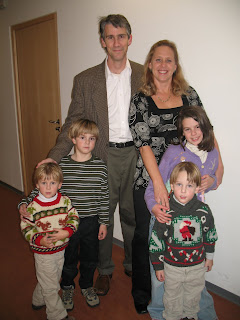 Damon and I took the kids to the Esslingen Medieval Christmas Market on a Sunday two weeks ago. We hadn't been in three years, not since the year Aidan and Matthew were six months old and we dressed them in their matching Santa outfits (courtesy of Grandpa back in the U.S.), tucked them snugly and warmly into their double stroller and proudly - but slowly - pushed our way through the merry masses. Or maybe that was in Horb.

In Bebenhausen that same year, the market took place within the walls of a real medieval cloister, making for fantastic ambiance but also making it a two person job to maneuver the double stroller around the courtyard. (Read: Lots of stairs, but no double strollers 500 years ago!) And Stuttgart's internationally renowned (internationally in Europe at least) market has been out of the question since Andrew got pushed off the kiddy-train when he was two. By an adult.

When Aidan and Matthew hit 18 months, their second Christmas, we tried out the Christmas market at kindergarten, where we promptly lost sight of them, and the two others, in the amazingly large throng of people. (Germany does Christmas really really well - Christmas events, in any shape or size, are heavily attended.) We ended up huddling together inside the kindergarten building for warmth, and safety, as they both threw tantrums on the floor. In their snowsuits, I remember it well. Most people looked on in shock and bewilderment. Shouldn't we do something? Like what? The exit was blocked, the evening was dark, and we were stuck until the Gluhwein ran out. The other twin mom, four years ahead of me, just smiled in sympathy and understanding.

So it was with a bit of trepidation that we ventured out this year at all. We'd hit the Tuebingen Chocolate Festival two weeks earlier, on a Friday afternoon when it wasn't too too crowded yet, and done okay. By which I mean Damon and I swallowed our ennui at yet ANOTHER quaint old German marketplace (which really are very pretty!) and the kids swallowed their disappointment at not being allowed to stay home and play computer games. First stop, chocolate Santas, eaten on the steps of the famous Tuebingen church. Next, chocolate covered marshmallows on a stick. (I know, I know! And in health-conscious Germany too!) On to chocolate covered waffles. Topped off with steaming mugs of hot chocolate on the steps of the fountain in the old town square, in front of the pretty painted Rathaus. If nothing else, it got us out of the house for a few hours.

Determined to appreciate the beauty of a German Christmas, despite the Scrooge-like thoughts running through our brains, ("It's too cold. It'll be too crowded. Been there, done that, drank the Gluhwein.") Damon and I summoned up genuine holiday enthusiasm for the Esslingen market this year, our favorite of all those that we've visited. The ground was blanketed in a light carpet of white, thanks to the first snowfall of the year the night before. And the temperature hovered at 0C/32F, surely not all that unbearable if we dressed ourselves appropriately. We just needed to pull ourselves out of our winter stupor and get out the snow clothes.

We arrived in Esslingen, cheerfully Christmas-carolling our way out of the parking lot and into the old section of town, Andrew bitching and moaning the entire way. (A new one for us; Ryan sang and danced happily along. What do we have, one good mood between the two of them?!) But by the time we reached the market - and the edge of the crowd - it was COLD. Bitter, icy, windy, gray, cloudy cold. "Come on kids, some hot food and a fire will warm you right up." we optimistically chimed. But, to be honest, the thought of standing around a barrel with strangers, in the cold, eating food off a stick, was less than thrilling. It was going to take a heck of a lot of Gluhwein. Andrew wanted to go to Starbucks, the familiar green sign a welcome beacon of warmth amidst the stately centuries-old buildings.

But we perservered. Flammkuchen, hot from the oven, cold almost immediately, eaten around a barrel with friendly strangers who offered to take our picture for us. (Turns out they were from England, basking in the tropical warmth of a German Christmas.) Pig on a stick, always a classic. Potatoes that failed to pass as french fries to Aidan and Matthew. No drinks - it was just too darn cold. Starbucks was looking good.

The kids had their typical Christmas market view of what our friend Jay, now warmly spending Christmases in Virginia, calls "asses and elbows." So, still trying to make the best of it, I took Aidan and Matthew by the hand, past a crowd of fur-wearing ancient warriors and their Land's End wearing kids, threading our way amongst wild-looking Vikings freely interspersed with matching retired couples, to try to catch a glimpse of the jugglers in the center of the marketplace. It was optimism overcoming common sense. (Which is a good thing, and entirely necessary if you are attempting to enjoy a German Christmas market with four children under the age of ten.)

I tried, I really did. Matthew on my shoulders. Aidan in my arms. Both so bulky in their snowsuits that I was barely able to bend over (with Matthew hanging on for dear life!) to pick Aidan up at all. And then their bulk worked against us as their layers repelled one another like magnets. I tried to hold Aidan at arm's lenght, the closet the snowsuits allowed him to get, but he was just too heavy even with the extra hours I'd been putting in at the gym. He slid down and Matthew gratefully followed. I was laughing at the absurdity of the situation, not at all angry at the failure, just satisfied with myself for the attempt.

And then it finally hit me. Words of wisdom for tourists everywhere, something I think the Germans must have figured out long ago. GERMAN CHRISTMAS MARKETS AREN'T FOR CHILDREN!! Sure, they have an occasional kiddy ride (the train Andrew got pushed off of in Stuttgart) and Esslingen actually has an entire section devoted to children's activities such as candle making (over a hot fire) and axe throwing ('nuf said!) One- or two - kids would be bearable for an hour or two. But as a family activity? It's like bringing your kids to an Irish pub on St. Patrick's Day - in Boston. For the culture. We meant well, American tourists bound and determined to show their kids the best Europe has to offer, but sensible German families with kids were home baking home-made cookies - or had ditched the kids with Oma and Opa.

In the crowded medieval center of Esslingen though, I found the Christmas I'd been searching for. Christmas found me, thoroughly defeated, miserably cold, hemmed in on all sides by asses and elbows.

Life, for me at least, isn't about the perfect holiday moment. In striving for perfection, perfect memories, perfect home-made crafts and cookies, I'm missing the real thing itself. Life lies in the attempt, not in the accomplishment. Life is in the trying.


Have a big, fat, hairy Christmas!!! Love from the Connors
Posted by Twintensity at 11:37 AM