Family Size - Whose Business Is It? 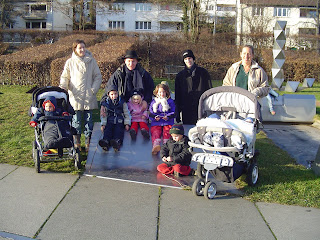 Germany is not a child-friendly place. 50% of college educated women have no children at all. The average family size is 1.3. The government is paying women to stay home with a child for a year AND pays monthly "child-money" - per child - to encourage families to procreate.

Sure, some families do the responsible thing and have their two kids. There are even some LARGE families with three children. And, to be honest, my town has at least 3 German families beside mine with 4 children, and I know of one German family in a neighboring town with 6. But see, I can count them. And I know of them because they are pointed out to me - as one fellow freak to another.

I actually have it very easy. First of all, I have the twins, spaced four years apart from Andrew. Still totally respectable, in terms of family planning, to go for that last baby at a decent time interval apart from the first two. A little crazy, that number three, but still "done." That baby number three turned into three and four is a source of amusement and some pity. But at least it isn't my fault that I had four.

I'm also American. Which excuses me (in a manner I do take laughingly, but is actually rather condescending) in the same way you'd excuse someone from a developing country from sending their boy to kindergarten with a girl's pink backpack. "Well, see, they just do that where they come from. They just don't know any better." When we were visiting the castle in Ludwigsburg this summer, and people didn't realize we spoke German, I began to feel like a cultural example of a backward country. "Oh my goodness, look at that poor woman with all the kids." Like I had to beat out all their clothes by hand on a rock by the river.

That poor woman. That silly woman. That obvious religious fanatic. The last is for my friend Maria, also an American living in Altdorf, who is expecting her fourth child in what will be six years. "I wonder what they think of me," she says. And I know it exactly. She goes to church regulary, as in EVERY SINGLE SUNDAY. She dresses modestly. And she wants a large family. She's obvioulsy been brainwashed by some cult, church, same thing.

Her German neighbor, trying to be supportive and understanding of a primitive tribal value system, told Maria that her daughter has asked her why Maria kept having children. Which is already a pretty sad thing, and tells you a lot about German attitudes towards children, when this is asked by a child. (I had one 8 year old tell me they admired me for all the hard work I must be putting in with the twins. Well meant, but my goodness, do their parents teach them nothing about JOY?!) Maria's neighbor told her daughter that when you come from a large family, which Maria does, then you often also wish for a large family yourself.

Okay. But why does there have to be an explanation? What is the obsession with the size of someone else's family, someone else's truly personal decision? And wouldn't a better explanation be simply that Maria loves children? That she WANTS to have children?

It honestly doesn't occur to people that we have a choice in the matter knowadays. We DO know about birth control and we DO know how to use it. We aren't forced by our in-laws to produce a male heir or enough children to run the farm. We aren't held back by primitive beliefs. We actually WANT these children.

They don't get it. I have a lot of friends with only one child. That was enough. Life altering. Hard work. And enough. And while it would never be enough for me, anything less than four for me just wasn't half chaotic enough, it doesn't occur to me to question them. It's not my family. It's not my choice. Or friends who have chosen to have no children. My guess is they get as much crap as I do, but again, who is it for me to decide how another woman is to fulfill her journey, reach her potential, be happy?

My German friend gets it the worst. Nikki also has 4 children within 6 years. But she, apparently, should know better. Her eldest son, now 8, has started to take offense at the number of comments they receive on the streets of Stuttgart. Obviously not well-intentioned. "Are those ALL YOUR children? Are you the day-care provider?" Philipp has started telling people that there are families in the world with even more kids than they have. Poor kid, defensive at 8. (It is HARD to be different in Germany.) When we visited the other day, and later all trooped out to the car, the only other minivan on the street besides theirs, I heard him counting off the kids. "One, two, three, FOUR." He ran back into the house and joyfully announced to Nikki, "Mommy, they have just as many kids as we do!" Phew - he fit in at last.


There are so many ethical issues surrounding family size. Octomom. IVF. Welfare families. World poverty. Although, maybe to salve my conscience, I see this last as a matter of redistribution of wealth and of education and opportunities for women. In Haiti, most women I knew would CHOOSE to have two children. They just need a means of birth control. Given the choice, I truly believe most families would have two to three children, some none and some more, all evening out in the end.

My message is just one of joy. Crazy, religious, American, uneducated (or worse yet, educated and raised PROPERLY and should know better), sending-your-kid-to-kindergarten-with-the-wrong-backpack, scrubbing-your-clothes-by-the-river JOY!

When you find joy in yourself, you will see it in others, regardless of what color they are, where they come from, what language they speak, or even how many children they are - or are not - towing around behind them!

ENJOY!
Posted by Twintensity at 12:40 PM