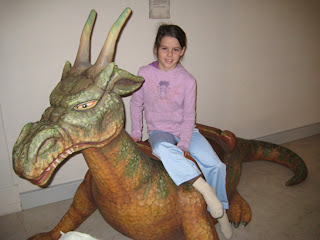 Ryan's third grade is going to be taking the standardized math tests next week, the ones that are used to compare results state and nationwide and possibly even internationally. Naturally, the teachers are in an uproar. Me - I know where MY kid stands, and I'm even starting to get used to it and accept her for who she is.

The rest of the third grader's in the nation may well be open to page 17 in their math books, but my child not only isn't on the same page as everyone else - she's in a different book entirely.

I noticed it on her last math test - another 3 -4 , the equivalent of a C in the USA. The equivalent of trade school here in Germany. The funny thing is, she did fine on most of the math she actually did. Her problem wasn't the math, it was sticking with the program. And it didn't bother her at all to make something up entirely just because she didn't want to deal with the program at all.

Funny enough, I was relieved. Phew. She got the math.

The teachers call her a dreamer. In German, this isn't a compliment - probably more the equivalent to having her head stuck in the clouds. And no feet on the ground.

The practice standardized test the two of us just worked on for two hours was hysterically funny. Again, she had the math - and she had a great time with it - adding numbers, figuring out charts and graphs, deciphering patterns - anything at all, except for actually answering the question. Again, I am relieved - the mind works. But noone else is going to be impressed - because it's not working in the standardized way.

My husband just told me about the 2 year old who had been inducted into MENSA with an IQ of 154. Not to belittle the achievement, but I don't believe in IQ scores. Not that the kid doesn't have to be spectacularly brilliant to be able to UNDERSTAND the test at all. Poor thing. Where is that going to get her when she's already labelled at the age of 2? Is she too smart too throw herself off the back of the couch to see if she can fly? Or to paint- or write an essay -in crayon on the living room wall? Unroll the toilet paper?

I believe IQ scores test common intelligence - what society takes to be intelligence - and that it is an artificial label of intelligence. In the 1950's women scored consistently higher than men until officials "corrected" the test to reflect what they wanted. Blacks and minorities have also historically scored lower - until for the last 30 years developing countries have increased scores dramatically - due largely in part to a more sophisticated and technical society. (I read this recently, but will have to figure out where and document it properly if I ever decide to publish; I'm hoping you'll take my workd for it.) People with high IQ scores ARE intelligent, but I don't think it's the IQ scores that prove this.

As for me, I'm using my above average IQ score (in grade school at least) to try to understand a child who wouldn't break even on it - she'd be too busy doodling on the sides of the pages or building different configurations with the bricks. Possibly just staring into space.

I have to feel sorry for her teachers - after all, they are the ones who are judged on the scores. They will continue to tell me that she is unfocused and needs to learn to take things more seriously.

Me - I'm going to have to agree that she needs to memorize her multiplication tables at some point. (Maybe this summer when she's visiting my parents?) But I'm beginning to accept that she's not sticking to the script. Everyone else is studying their lines - and Ryan's making up her own.

Don't get me wrong - I'm terrified. I know where the script leads - college, career success, financial security. And I have no idea where Ryan's is leading her. (Add to that the fact that the government is threatening to close the small, local trade school she would be starting in fifth grade and to send the kids to a large, impersonal one with as little individual attention as the college track gets.....well, I'd finally begun to accept her path, and then they close it. But that's another essay for the German politicians.)

In the meantime Ryan's class continues to prepare for next week's testing. Her teachers keep hoping she'll shape up, wake up, get her head out of the clouds, keep her feet on the ground. Of course I'm hoping for good grades too - but I'm done trying to bring her down to earth.

What good would that do? She hasn't read the rule book anyway!
Posted by Twintensity at 8:16 AM