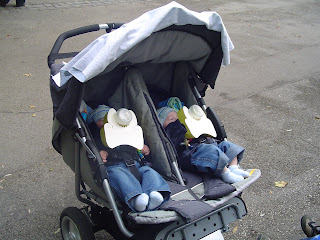 One of the fun parts of being pregnant with twins was looking through all the twin catalogs/twin websites and seeing what cool equipment you were allowed to buy.

Okay - buying the stroller, a new car and TWO new car seats wasn't all that much fun - too much money involved - but the little stuff was neat.

Looking back, I didn't use too much of it, but there are one or two that did make my life easier.

The double baby carriers weren't worth it. When we did use them, we used them singlely - with each of us carrying one baby. Two at once was just too bulky to make it useful. One COULD do it, but it wasn't helpful. I'd suggest finding two single baby carriers and using those; they are cheaper than the official double or triple version. (Yes, they did advertise carrying triplets - things that make you go 'huh'?)

I didn't use the twin leashes either. They were one of the first things I bought, figuring I was going to be out and about a lot. I did see one couple in Florida using them for their 18 month old boys, but they were each following one child individually, which to me kind of defeated the purpose of the whole thing. I just never found a practical application for them, although I love them in theory. Aidan was walking at 10 months and Matthew at 14 - something which is very rare with twins; generally they learn within days of eachother, especially identicals. It worked out since I was able to keep up with Aidan while toting Matthew along on one hip. Also, I was able to leave Matthew on a blanket without great fear that he was going to go anywhere.

I stayed at parks and playgrounds where I was able to keep an eye out on everyone. There were more open parks and fewer playgrounds than with a single child since I wasn't able to follow them both up and down the slide. And they had more freedom to roam than a single child - with me running after the one who happened to be in the most difficulty at any particular moment. Precarious times. Hectic times. But I still wasn't able to figure out how a leash would work to my advantage.

The two things I did find indispensible were the twin feeding logs and the bottle holders. I used the feeding logs for the first six months, until I got the hang of a routine, and was sure that everyone WAS eating regularly. Really - whether you purchase them or make them yourself - these are a necessity with multiples. I carried them everywhere with me. And I also used them to jot down short notes and ideas I had at the time, the only way I remember some of those days in retrospect.

The bottle holders were the best investment I ever made. They are foam pads shaped to rest comfortably on your child's chest and to hold a bottle in position for feeding. They are La Leches's biggest nightmare. Not only are you obviously NOT nursing your child, you are also not resting quietly with your child while feeding it. Even less militant advocates than La Leche have qualms about the holders. Bonding and resting and spending time with your child are as important during feeding as the feeding itself. But, lets's face it - with two or more to feed, and others to care for, feeding isn't always as relaxing as it's cut out to be either.

Words of caution. Never leave a baby feeding unattended. Mine never had a problem pushing the bottle away when they were done, but the obvious risk of choking and/or drowning is there. I also didn't use them until the babies were over three months old. (To be honest, before that time, I don't think the holders would have stayed on their tiny little bodies.) The critical time period was the time from 3 to 9 months, when they were able to hold their bottles themselves.

I got a lot of looks - and laughs - at the two of them in the stroller with these huge, yellow cushions on their chest and two bottles sticking out. Did anyone criticize? Not here in Germany. My guess is you'd get more heckling in the USA, from self-righteous know-it-alls who have never had multiples, but feel they are experts because they personally nursed their two children, born three years apart, until they entered kindergarten.) I fielded some comments with the misgivings I personally had about not being able to personally, quietly feed my children. But for the most part, people were just amazed that I was managing with all four kids at all, and noone judged me for doing what I had to do.

There are also some specialized bottles made in England that you can place on the floor, put a pacifier-like plug into your child's mouth, and you don't have to hold the bottle either. These were something like 75 Euros EACH, and so I settled for the cushions. (The cushions are about 30 Euros each too, but totally worth it.)

A third item, the twin feeding cushion, was also totally essential, but not nearly as much fun. It took up half of the living room, was totally uncomfortable, and trapped me on th couch, upright, for feedings. But it was necessary to nurse, or even bottle-feed, two babies at once, alone.

I've got the baby carriers and the leashes ready - brand new - for the next person who'd like to try their hands at it. One of the bottle holders was lost at an amusement park just as the twins were getting ready to outgrow them, but I do have copies of the feeding log too. And I am more than thrilled to get rid of the feeding pad.

But really - check into those bottle holders. They are the gift of a second pair of hands.
Posted by Twintensity at 4:39 AM