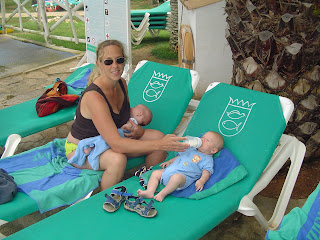 That last blog on sleep deprivation wasn't totally fair. Turns out I am angry, in retrospect, at the lack of sleep noted in my logs.

At the time, I was so busy having a fantastic time with my two new dolls, that I didn't miss it at all.

Okay - that's an oversimplification too. The truth, as usual, lies somewhere in between.

I couldn't wait to have these babies. It was so cool - two at once - what could be better?! And we had so much fun with them. I do remember being tired, but also proud that I was doing as much as I was, doing it all and doing it well. I remember thinking how amazing it was that I was able to function on as little sleep as I was getting. And that - if you are doing something you love - you can do it no matter what. Sure - I was showing off a bit - but that's what kept me going all day. Those little guys were busier in the first few weeks of their lives than most babies are in the first two to three years.

They came home from the hospital on Friday, July 7 and were at the 100 Year Festival for the kindergarten the next day. They slept the entire four hours. Whose fault was it really that she wasn't home taking a nap while she had the chance? But I wanted to be there for the older two kids too.

On July 13, they wined and dined at a formal restaurant in Schlossplatz in Stuttgart to celebrate the opening of my husband's company's new office space. See. We can do it all. (This included climbing up 8 or 9 flights of stairs - to the loft space - less than two weeks after delivering two babies - because the elevators hadn't been installed yet.) On July 16 they went to their first animal park. On July 19 they hit the pool. (My mom was still with us at this point, so I had help.)

On September 8, when the twins were 2 months old, we flew to Mallorca (with help from Damon's dad). We got back in time for Ryan's first day of first grade - a major all- day bash that they naturally also attended. On October 13 we spent the weekend in Munich. We took advantage of the Christmas holidays to head to Strasbourg, France. (After attending every kindergarten and first grade and play group Christmas event in December) In April we saw Italy.

In retrospect, I figured I could give up or I could keep going. And I kept going. The older two kids didn't suffer. The twins didn't suffer. Damon and I suffered a bit - but no more than one is willing to for their kids. Let's face it - I could have stayed home, focused on a sleeping schedule, taken naps instead of heading to the pool - or to Italy for that matter. It was a choice.

I wouldn't trade that first year for the world. WE DID IT! And we did it well. Why I'm pissy now is beyond me. Maybe because I'm 40, stuck in a little apartment in a small German suburb, with 4 kids, and a figure that will NEVER look like it did at 30, no matter how many situps I do or how many miles I run.

Maybe I'm pissy because it's over.

Sleep deprivation and all - those were the happiest days - and nights - I can barely remember!
Posted by Twintensity at 1:23 AM