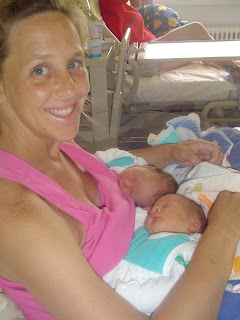 I knew those twin logs would come in handy some day - and not just for feeding purposes. I remember being in awe (and I still am) at anyone who had managed to write one of the twins books I had devoured during my pregnancy. The best I could do was to jot down some notes on the log and hope that I'd have the chance to look back at them some day.

What was I thinking?

It's a blur now, but it's fun to see that most of my thoughts were positive - and that the thrill of parenting my two little guys vastly overshadowed the exhaustion.

1. It's good that I already have two kids at home, so that I am better prepared to deal with this. A little naive maybe, but I still do think that having had experience parenting two children previously, kept me calmer and better able to cope than a new mother with two at once. (On the other hand, I had "grown-up" activities to deal with in addition to caring for the two babies.)

2. This is much better with two babies, than with one. One just seems so boring now. I swear to God, I thought this more than once, so take all the moaning with a grain of salt.

3. NOW I feel like a MOM, and not just some fat lady stuck at home with two kids. God bless maternal hormones; they'll get you through if nothing else will.

4. And then on midnight July 5 - I am DYING here, have had NO sleep, each baby has had two bowel movements, they are screaming and.....wow, finally the nurse came with pacifiers, some glucose, and an offer to take one of the kids to the nurse's station for a few hours. The nurse was summoned by one of the other mothers in the room, at her wits end only listening to the neverending battle going on in my corner of the room. The pacifiers were not MY idea, but something that the nurse INSISTED was going to be necessary with twins. Not a bad idea. Matthew used his 9 months and Aidan 18 months. I've never been a fan of pacifiers - but I am a fan of sleep.

5. At least I have learned not to bother TRYING to sleep. It is less frustrating that way.

6. Birds are not as cheery at 4:45 in the morning when you haven't slept all night.

7. I alternate between being jealous of the other moms - the time they have to themselves in comparison to me, and the ease of caring for only one baby - and feeling sorry for them. I have these TWO FANTASTIC PERSONALITIES to take care of.

8. Why is the woman with the C-section more mobile than I am? This because I was still trying to figure out how to get out of bed with two babies in my arms.

9. Once at home on July 11 I actually felt that I am playing house with two dolls. This is so much fun!

But the entry on July 9 is most astounding. I sleep more and easier with these two than I did with Andrew. Andrew was a monster - I was up with him 2 to 3 times a night for the first 7 months. I remember telling people that Andrew was a good precursor for twins because caring for two wasn't really all that much harder than caring for him had been.

And I realize only now - with my recent energy spurt - that I had been exhausted and depressed by the pregnancy for the last two months. I carried to 39 weeks with a dropping platelet count and was BEAT by the end. But who would have guessed that I had energy, and that I was having so much fun, that I actually didn't miss the sleep I wasn't getting at the time.

The July 9 entry also offers up an explanation for my twins' differing sleep and feeding patterns. Already I see them as two totally separate individuals. They don't seem to be at all like twins, or to be "the twins". It's like I just had two entirely different kids at once! They are fraternal twins, they still look nothing like eachother - and they are still as different as two kids can be. You wouldn't guess them to even be siblings if you didn't see them wearing the same outfits. And you would never believe that they have been exposed to the same parenting style and the same experiences.

I think it's awesome. I've read that fraternal boys are the ones least likely to exhibit that mysterious "twin bond", that they are way more competitive than cooperative. And maybe that's made it a bit harder. My guess is that identical twins, sharing the same DNA, would have similar sleep and feeding patterns early on, and similar play habits later on. Girls, in general, are supposed to be more cooperative, even with a male twin. Whenever I saw twin girls in the first two years, they always appeared to at least be running in the same direction.

Maybe I just have way too much time to think about it all now that I get a full night's sleep regularly.

Yesterday, I gathered the four kids around the table, and we planted seeds - just like I used to do when I only had the first two to contend with. Have I finally figured this whole mothering thing out? Far from it - but I do have my moments.
Posted by Twintensity at 2:38 AM