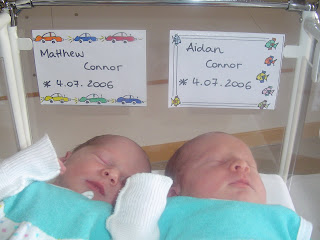 A friend of mine, another American living in Germany permanently, recently blogged about homeopathic pain management. She wrote about being offered Arnica, a homeopathic pain pill, while in labor at a German hospital. As if these people had never heard of an epidural?

I know. I know. It's a beautiful process. It's so much more rewarding to go through it naturally.

For the first five or six hours maybe.

My first labor took 48 hours. Intense for 12. Then it stopped for 12. 12 more intense. And then the REAL part. I was totally prepared to do it naturally. I was adamant I would not need drugs. But when they strapped me to all the machines, the permanent stress test, and forced me to lay on my back indefinitely, all bets were off. Where was the bouncy ball? The walks along the hall. A warm water bath maybe? Due to earlier complications in the pregnancy, a femoral deep vein thrombosis at week 28 and subsequent anticoagulant therapy, noone was taking any chances.

And strapped to your back, with no ability to move, is NOT natural childbirth.

Funny enough, they never asked ME if I wanted the epidural. They asked the baby's father, now my husband. After an hour of telling him that we would never be married, that the child would never have his last name, and that if they had to end up doing a C-section after all of this, then they might as well tie my tubes while they were in there, the nurses asked HIM if HE would like to have me sedated. What a relief!

I was a little loopy at first - they really don't mess around with that stuff in the USA - but it allowed both of us to enjoy the experience; we still had about 6 hours to go at that point.

So, I NATURALLY opted for an epidural the second time around as well. (24 hours total labor, 12 intensive in the hospital) This time the doctor wasn't sure she could accomodate me due to my blood values - I still wasn't clotting - but she gave me a dissociative drug until the lab work came back. Okay - that was a really cool, legal drug experience. I felt the pain, but it didn't bother me at all. Hence the term dissociative: your spinal nerves receive the incoming pain signals, but they don't get transferred to your brain. Totally interesting.

I'd heard about the German aversion to pain medication during delivery, so naturally I was psyched I would be an exception. I'd need an epidural, even though I was delivering "naturally", just in case we needed a rush C-section at any time. In went the needle; I was a happy pro at this point. Interestingly, the Americans put the epidural in during a contraction, so that you are concentrating on the pain of the contraction and won't notice the needle. The Germans wait til the contraction is over so that you can concentrate on it. Whatever. I remember telling a little Asian-American anesthesiologist that I loved her, really and truly, during devliery two.

So. The needle is in the third time. And I'm still feeling the pain. A lot of it, in fact. I take the trouble to explain to the nurse that she is going to have to put some medication INTO the needle if it is at all going to work. "Didn't you practice your breathing?" she asks. This with that smug, holistic German superiority. "No, I did not practice my breathing." I less than patiently replied, "This is my third delivery, I am delivering twins, and I want my drugs." She took a look at Aidan's head trying to force itself out of the 6 cm dilation in my cervix and goes, "ooh...that does look like it might burn a little." "Pull out the catheter right now." I directed Damon in English. "Why?" he asked. "Because I am going to pee all over that lady if she doesn't listen." Apparently she understood English. I got my epidural. (Although I ony had 6 hours of intense labor this time around.)

Later, after pushing Matthew out in the breach position, causing a three layer tear that took 2 months to heal - because, you see, episiotomies aren't natural either - the nurse had the nerve to smugly come by and say, "See. That wasn't so bad now was it?" Come to think of it, the tear was probably caused by Aidan's head coming out before the medical team was assembled, with the student-nurse frantically holding it in so that he wouldn't come out before the doctor came in. (We had a similar situation with our first, but the doctor made it in with Coke can in hand, ready to catch the baby in the other.) In the case of twins, it was approximately 10 obstetrical and perinatal doctors and nurses who had to sprint down the hall, some rushing in after Aidan was already born, to handle the second shift.

Wipe that smug smirk off your face. When we tell you the kids come fast, we mean it.

I'll be honest. The German delivery was the nicest I had, maybe because I was less sedated. I actually felt Matthew come out, the first of four, and it was cool. Since he was breach, I had to sit up and I had to watch. I was way more of a participant than with the other three.

And I do feel the USA is rather careless in it's use of pain meds during pregnancy. I had a severe deep vein thrombosis with Ryan, and initially I did need some valium to withstand the pain. We later switched to Percusset, again because I needed SOMETHING. And no, Arnica wasn't going to cut it. But the doctors never informed me that the medication could cause heart defects in my baby, never explained the need for the frequent cardiac ultrasounds that final trimester. And they delivered that Percusset like it was candy. I took it every 6 hours at first, waiting until the pain in my leg became so intense that I was sweating and clenching every muscle in my body. But I was liberally ALLOWED it every 3 hours. I weaned down to once a day and then switched to Tylenol after 2 weeks. But they would have kept dispensing the Percusset indefinitely.

Would I like to try delivering without medication? There are no guarantees. If I dilate fast enough - none of this 24 hour nonsense - I think it'd be neat. I'm not against a natural childbirth. I just think that, like breastfeeding and male circumcision (another BIG no - no here in Europe), there is no right answer. Hey - maybe we can just have Damon catch the next one, and not worry about the doctor making it into the room.

I'm just tired of being lectured to on natural childbirth by smug mothers six months pregnant .....and sipping a Mai - Tai.
Posted by Twintensity at 7:34 AM