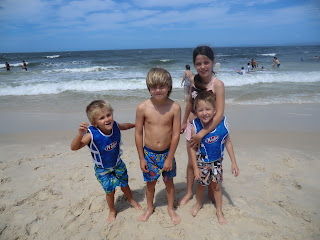 You've probably heard about the flooding we've been having here in New South Wales and Queensland. No? Well, it's one of the advantages of life down under. We escape the public eye. You have no idea what true freedom really is, America, until you disappear from the news.


After two years of drought, where it got so bad that the koalas were coming down out of their trees and begging for water from garden hoses, this past October was the beginning of the rainiest spring ever recorded in this area, since they started recording over one hundred years ago. (114 years, I believe, and that's a LONG time for this young country!) The creek down the road – the one they assured us hadn't flooded in over ten years – has flooded three times in December.

At one point, after a particularly rainy week, the kids looked at me and said, ''with all this rain, we might as well be back in Germany.'' I had to remind them that they were saying this dressed in shorts and T-shirts.

We've made it to the pool quite often though. The temperature has never dropped below 25C – the water temperature – which, although the Australians think we're crazy, is warmer than the pool in Hildrizhausen EVER was....HEATED! Plus, someone's gotta keep the water level down.

So that the twins have gone from being able to swim a few strokes from the side of the pool into my waiting arms to leaping and diving and dancing like porpoises upon the waves. Porpoises on crack cocaine, perhaps, but porpoises none-the-less.

We can't afford the swim lessons that every self-respecting Australian child takes every summer. Kids here swim earlier than German kids learn to ride two wheelers without training wheels. And let me tell you, that's pretty darn early. (Four, okay, the answer is four.) If they can't swim by prep school, they learn it there. With refresher courses every year. Swimming is big here. Yay me. How did I manage NOT to grow up in the country that so far encompasses every single one of the values I hold dear?!

Swimming. We swim almost daily and the boys jump and dive and twist and wriggle around the pool while Ryan gracefully guides her lithe figure between them doing her laps.

It ain't pretty. Aidan swims like Andrew did a few years ago. The lifeguard in Boeblingen almost went into early retirement. They both like to sink to the bottom, blowing bubbles on the way down, thrash about a bit under the water, and then surface after about thirty seconds to gasp and gulp for air. The trick to getting them to swim is to ignore the drama.   (Matthew meanwhile, cuts through the surface of the water like a shark; he is showing signs of being every bit as graceful as Ryan.)

Underwater they are all as graceful as porpoises. It is so much fun to see them twirl and dance. Underwater, they are birds in flight.

And, I think, what are swimming lessons this summer going to teach them that they aren't already learning on their own? Proper strokes would be nice. Staying above water a bit more will be helpful in the long run. But, the rest of it, the joy and the basic skills, they are learning as they dance and play.

Which, it suddenly hits me, is what it's all about.
Posted by Twintensity at 12:00 AM