Rowing (News from just outside the Flood Zone) 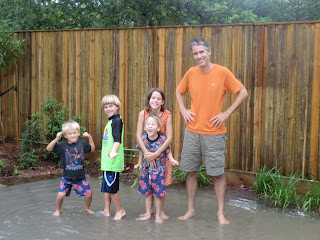 I thank you if you are too worried about us to appreciate the irony. We leave Germany after the coldest, darkest, wettest summer anyone can remember, bitching and moaning about the terrible climate in Europe, only to end up in the midst of the largest flooding in recorded Australian history. Which, although admittedly short, still shows that Australia likes to do things bigger than anyone else.

To put this in a European context, the area of the flooding is more than the size of France and Germany COMBINED.

I say CURRENT flood area because it is still raining. Heavily. And unbelievably continuously. Meine Damen und Herren, Mesdames et Messieurs, we may have lost the Ashes to England this year (honestly, whatever THAT means, but it is apparently a pretty big deal!), but we've got the highest recorded rainfall.

In a country whose early exploration is measured in lives lost to drought.

Before we came, eastern Australia had been experiencing two years of severe drought. The dam in our area – the one that has supposedly been saving our butts up until now – was measuring 16% capacity. All five gates are now open and spewing torrents of excess water. Where I am not sure. I don't quite get how dams are saving us from flooding. Capturing the excess water up to a point, I guess. Controlled release perhaps. There is talk of building more dams – always an issue in Australia – to prevent flooding in the future. Although dams destroy natural habitat. And although this has never happened before.

It's an illusion of control.

There is something awe-inspiring about being in the center. 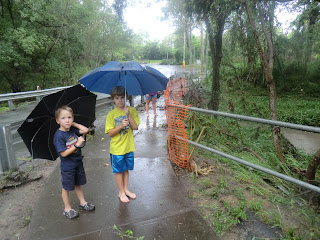 This, of course, because we have been protected by the dam until now, and because we are safe at home with plenty of food. And water. Hah hah. We also stocked up on puzzles and board games (Ryan and Andrew are old enough to play CLUE now – YAY US!) at the mall on Sunday. And bought a sound system that includes a radio for public emergency broadcasting. And a CD player for dancing to Shakira.

So that so far our biggest concern has been keeping the kids amused indoors for weeks at a time. Something I am used to post-Christmas in the Northern Hemisphere. The absence of a TV has actually helped, I think, since we were forced to rely on ourselves early on and not lulled into semi-catatonia early on by relentless TV watching.

We've made it to the movies twice. (GO SEE TANGLED! It is AWESOME.)

The sun came out on January 2, for Ryan's birthday and we made it to the beach.

We're on the fourth Harry Potter book, the fourth of a unicorn series, a few Star Wars. Andrew is half-way through the Beast Quest series. Ryan has read a handful of chapter books ON HER OWN.

Damon had read all the Harry Potters and Star Wars books aloud and has read three more on his own. Something he hasn't had time to do in years.

We're also working on a 750 piece puzzle, having worked our way through a half- dozen 100 piece puzzles. The twins can do 50 pieces on their own.

Matthew can spell his name, my name, Aidan's name, Opa and Meka. In upper AND lower case.

Aidan is starting to spell his.

I've begun working on inverted poses in yoga. Which means the kids walk into the bedroom and have to speak to me upside down from where I'm doing a headstand in the corner. And I can do a downward dog with two four-year olds crawling around underneath me playing tunnel.

I've also started Qi-Gong in the mornings and am FINALLY getting the hang of meditating.

The kids, meanwhile, are running around in their underwear. But -as I see it – after six weeks indoors – we are doing pretty good!

We've had Aunt Merle, Damon's Nana's cousin, checking up on us regularly. And the neighbors offering rides to the market for supplies.  The TV and extra games for the kids just showed up - donated by a friend from school in order to keep us in touch with evacuation information and to keep the kids from beating eachother silly while we wait for news.  They've also offered to host us  - they live on TOP of the hill that we live on the bottom of - even after seeing all four kids and knowing what they are getting themselves into by offering.   So that we are taken care of. 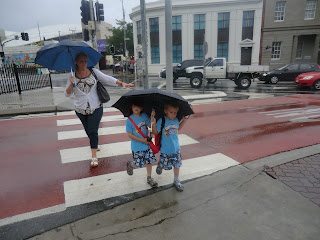 The worst we've had to do is cancel Ryan's birthday party on January 15.  Since she's traditionally had her party in June anyway, she's being a trooper about it.  And we've been invited to that same friend's house to play Wwii instead.  If the creek between our house and theirs recedes from the road and neighborhood (I'll post the photos separately in order to explain them) and decides to become a creek again that is. 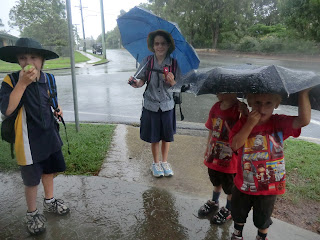 It's all good.  Because we have friends, neighbors and family watching out for us.
Posted by Twintensity at 7:11 PM