We've discovered some unexpected flotsam on our trips to the beach here. 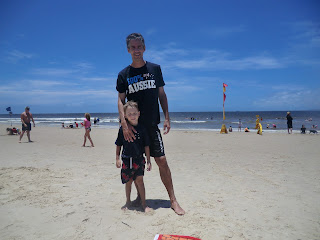 1.the part of the wreckage of a ship and its cargo found floating on the water. Compare jetsam, lagan.

2. material or refuse floating on water.

4.a vagrant, penniless population: the flotsam of the city slums in medieval Europe

While I don't think of us as useless or unimportant, vagrant population fits and I like that concept of odds and ends.

And it fits better than jetsam, which as it turns out is: goods cast overboard deliberately, as to lighten a vessel or improve its stability in an emergency, which sink where jettisoned or are washed ashore. (also from dictionary.com)

Our being here is chance and good fortune, nothing deliberate about it.

The flotsam that finds its way to us, as kindred spirits with familiar accents, are other American-Australians. (African-American-Australian, Irish-American-Australian, German-American-Australian; the most important part being the Australian.) Turns out we are part of a once-unknown species that may be more prevalent in Australia than previously supposed. It's hard to tell. We're pretty scattered. We breed with the local population. (In fact, that seems to be what got most of us over here in the first place!) But more than that, we love it here so much, that we don't make waves.

We do tend to cluster in small groups and exchange phone numbers. If you listen closely (and can understand our accent) you'll hear us talk about things other Australians take for granted. ''And the schools, can you believe how good the schools are?'' ''Oh yeah, it's way better for raising kids than back in the U.S.'' (And no, I haven't heard ANY of us refer to it as 'back home.' More like, 'back there'.) And, of course, ''yeah, the Australians are unbelievable. So friendly. So laid back.''

General consensus of this flotsam is that we ended up in the right place.

''Give us your tired, your poor, your huddled masses yearning to breathe free.''

Who would have thought we'd find the American dream? 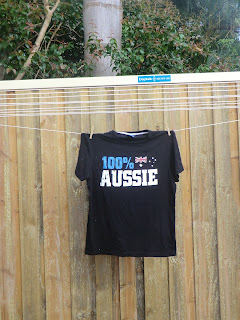 Right here in Australia.
Posted by Twintensity at 12:00 AM