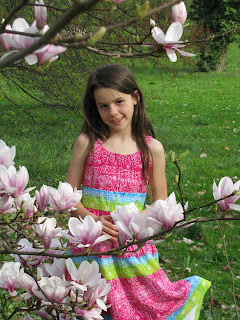 She's the child the fairies sent me. You can see it in her eyes and in her shy, quiet, crooked smile. If the slight build isn't a tip-off, I notice it when she steps back, withdraws from the action, or self-consciously stays in the action, knowing she isn't fitting in, aware she doesn't quite fit in, but not knowing what she can do about it. It's as if she's here on borrowed time, just slightly out of focus, not entirely here with the rest of us.

It's not that I'm afraid to lose her; I'm scared we never truly have her here with us at all.

This week I'm fending it off from her well-intentioned teacher. She too senses that Ryan's thoughts aren't always here with us on earth. She calls it lack of focus. Is there even a phrase for "flights of fancy" in German? Fantasy. Imagination. They have no place in a focused German grade school. Even the stories are judged - and graded - on how believeable they are, not how imaginative or creative. And of course, grammar counts way more than story line.

But my anger at the system - and although there IS plenty to be angry about, it's another essay entirely - is only an excuse for the fact that it simply has no place for someone like my Ryan. You either have it - focus, intelligence, maturity - or you don't. And this is decided for you in the first four grades, before you hit the age of 11.

Despite assurances from many friends, German and American, including a musician and two physicians, that they didn't "come into their own" until after the age of 12 or 13, I'm afraid they may be missing the point. The assurance is that everything will be okay. The assupmtion is that she will come into her own.

What if she's already there?

To be perfectly honest, I don't know that Ryan's imagination is, well, imaginative enough for long flights of fancy. It's more a lack of interest in what's going on around her. If she's decided it's irrelevant, nothing will convince her to pay attention. And if it doesn't have to do with horse, it's obviously irrelevant.

Instead of assuring myself that she WILL BE okay, I am becoming more and more convinced that she's just fine the way she is NOW.

It's a lot easier to do after watching her ride on a Saturday afternoon. Her lithe figure on top of a white pony, her total concentration and ease of movement, the comfort and self-assurance, the CONFIDENCE, she has on a horse - it's the only time I see her truly in the moment, the only time she truly is herself. I don't need to close my eyes to see her riding her unicorn across a field of flowers to the castle in her native fairyland.

Of course the Germans grade everything - if you can't rank it, then it isn't worth doing - and there is an accreditation system in place for riding just as for everything else (swimming, running, judo, cycling etc.). But my guess is that this won't hurt Ryan, that this is one grading system she'll do well in (as she did in swimming) but more importantly, that she's never really let the grades bother her up until now anyway.

Not to care what others think; this child has a courage I have yet to learn.

Of course her teacher sees it differently. And she means well. A child of this world does need to learn to read, and write (preferably intelligeably), and presumably do a modicum of arthimetic (really?).

But it's up to me to make sure that she doesn't forget how to ride a unicorn.
Posted by Twintensity at 7:23 AM