How Do They Do It? (Part Three - The Gosselins) 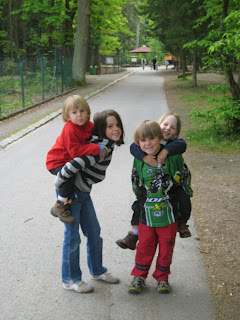 I wrote this in early April, before news of Jon and Kate's breakup. I wish I had posted it then, but most of it still applies, maybe even more so in light of the breakup. I did see a few minutes of an ad for the show on You Tube - and the fancy house and matching fancy outfits (sailor hats, really?!) together with the staged for camera outings had me questioning if the need for the TV show was really more about exploitation and less about survival than I'd previously thought, but for the most part, my predominant feeling is still one of sympathy. This is not a charmed, made-for- TV fairy tale and there is no need for envy or judgement.

I'll admit it - I not only picked up "Multiple Blessings" , the book about the Gosselin twins and sextuplets, but I devoured it from end to end. I couldn't put it down.

I am not living in the USA, and have no access to American television, so I haven't seen the show. In fact, I've missed the entire reality TV thing. I only heard about the book - and about the Gosselins themselves - through my sister. She had the book on her birthday list, explaining to me that it was the only "mommy/family" reality show she really liked because the mommy in question, Kate, was a total bitch like the two of us, ie a real person.

I thought, the last thing I need to read is another how-to-survive with a large family book. Perfect recipes. Organizational tips. Money - saving advice. Blech. Like I need someone else besides myself telling me what I am doing wrong every day. And "Multiple Blessings"? - like life couldn't be any more perfect than having 8 kids within a timespan of three years. Who needs to hear this?

From the moment Kate and Jon see six - at first seven - blips on the ultrasound screen the horror begins. There is no rejoicing or thanks - there is shock, fear and anger. This SUCKS. And that's what makes it real. They do it because this is what was thrust upon them - and they do it imperfectly to the best of their abilities.

I've envied TV families for cashing in on their reality shows - or the handouts they receive when large order multiples come into the world. But there is no way this family would have survived without help - financial and physical. It was not only hard, it was impossible for them to do alone. Okay, Kate now gets a monthly manicure/pedicure - this is after SIX years raising sextuplets. And apparently the whole family did fly to Hawaii. But I wouldn't trade raising sextuplets for a trip to Hawaii - and a camera crew in my home. Give me my twins and a trip to the local pool anyday.

Can you even IMAGINE living like this? Again, I haven't seen the show. I only have the twins - and four kids total - to compare it to. She literally couldn't leave the house. For years. She had to feed and dress 6 infants. With an army of volunteers. I had to dress the gang after swimming again today and I thought again - TIMES SIX! She couldn't cuddle and snuggle with her babies, she couldn't give them what they needed.

I guess she gets a little cranky on the show. EIGHT KIDS. How would you behave?

And she's a control freak too I hear. Again, EIGHT kids. I am sure she'd like to blow off an evening and just put off packing those lunches - but she CAN'T. And I'm sure it'd be fantastic not to have to think about dinner hours ahead of time - just whip something up last minute - but again, TIMES EIGHT. It isn't about control, it's about survival.

The book tells it like it is - HARD, REALLY HARD. But worth it because they love their kids. They do it because they have to. Kate just wants us to know she's done her best with a really really impossible situation.


I've been writing to make other moms understand how hard it is to be a mother of twins. If you find you are having a tough time dealing with the size of your family and the demands of your life, think of Kate struggling with her load.

This book will have YOU counting YOUR blessings!
Posted by Twintensity at 1:02 AM