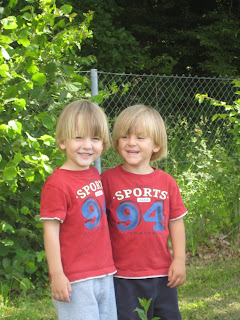 Matthew was sick again for two days two weeks ago. On Tuesday his fever was so high that he and I slept together for three hours in the morning. The rest of the day he lay in a daze in my arms on the sofa. On Wednesday he felt better enough to come with me to visit a friend for coffee. She couldn't believe how quiet he was; he sat contentedly on my lap for two hours while she and I talked.

It was another twin moment. You see, unlike most other three year olds who are bored with sitting around while their mother chats with a friend over coffee, this was something new for Matthew. He ate it up. Literally too, enjoying the hot cocoa and breakfast rolls, but also the fact that he was alone with us, alone without his brother along. This was uniquely HIS experience, his alone.

Aidan, on the other hand, was king of the kindergarten.

Alone time with mom, trips down the escalator, toys that belong uniquely to them - all these are new and rare for my twin boys. For their third birthday we have labelled a few of their gifts - sunglasses, water pistols, Lego cars - so that they now have something that is theirs alone. They still share - but I find it important that they have the same rights as other children to have something that belongs uniquelly to them. They also get a full portion of ice cream or french fried like the other kids. It was last year that they started noticing that the other kids were getting whole portions of things they were having to share.

But I'm not feeling so guilty about it anymore. That's life. They have to share a birthday; nothing will change that. But I can bake two cakes and we can sing two songs. That's enough for now at least.

And although they haven't had all the same life experiences of their single siblings, I'm realizing that they've had other experiences that are just as valid. No - the alone time was not there. But that is also a function of being a member of a large family, and not just of being twins.

The best gift I've given all of my kids is eachother.

They don't often have my undivided attention. I can't always focus on only one of them at a time. But they learn so much from eachother that any attention I do give one filters out three other ways.

It's most noticeable with the twins. They know about dinosaurs, we've gone digging for fossils, and they can play a mean game of soccer with their older brother. Socially too it is obvious that they are members of a team and that they have older role models to look up too. But the older two learn from the younger ones as well - even if they don't always follow the rules themselves I constantly hear them preaching to eachother about sharing and being kind to others. Nice to know they are listening after all.

Lately we've been spending a lot more time out as a family, cutting down on ballet and karate. I didn't want any of my kids to miss out on stuff just because they were part of a large family; I wanted to give them everything a single child would have. But for us at least, the constant activities were becoming meaningless. It was all just a bunch of hopping in and out of the car.

Instead of feeling sorry for or trying to compensate to my kids I'm finally realizing that the best that I can give them is the gift of home and family. Like my daughter mentioned the other day, if she were a single child we'd have way more pets, probably a dozen guinea pigs, some birds and a horse or two.

I can't give my kids everything. But I have given them eachother.
Posted by Twintensity at 2:44 AM