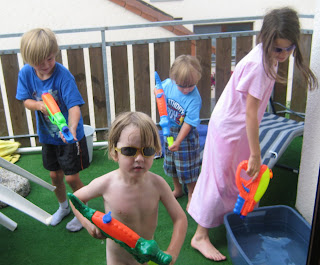 As I've mentioned, potty training has become a lot easier now that I don't take it as seriously as I used to.

There are some other signs of my maturing motherhood.

I like to think it's not as much a matter of slipping morals or of giving up as it is of a light heart and a happy meign.

The most noticeable sign is the water guns. Yes, guns, the four letter word I kept hidden from my older two children as long as I was able. Poor Andrew had to go and get the Fisher Price ambulance and paramedics everytime he tried to start a gun fight between a couple of his play figures. He was fashioning weapons from Legos and sticks by the time he was three, something I had read was perfectly healthy and normal. But then he also had to hear the talk on war and hurting eachother and how it was sad that people couldn't get along without fighting. Go ahead and play, I'd say, just remember that in real life real people don't hurt other people.

So far he has shown no signs of damage.

And when he said he wanted to stop judo class - something I'd encouraged because the teacher is a fantastic guy who incorporates Japanese philosophy into his class and is great with kids - because he didn't want to fight with people, well who could argue with that? Certainly not the teacher, who was so cool about it that I wished he was teaching street dancing or something else instead.

Andrew walks away from an argument - something which really pisses opponents his age off to no end - but will fight back to defend himself, or as importantly, others. It's a tough recess here in Germany - apparently the teachers go for coffee and leave the kids to fend for themselves - but Andrew has had no problems.

Until two weeks ago when we visited our friends, the Raibles. And were greeted by three kids toting Super-Soakers. We returned the following week armed and ready, but our dolphin and seahorse mini-squirters were no match. I hit the dollar store this week for the twins' birthday and came up with two crocodile Super-Soakers and two versions of the real thing. We are ready for a rematch!

Kids do know right from wrong. The twins don't know what to do when an 18 month old girl takes their toy away from them, they cry and look confused and concerned, but they do know not to hit, especially someone smaller than themselves. (Which is not to say that they wouldn't throw in a good push if I didn't step in and intervene immediately!) And man can they punch the crap out of eachother if I leave them in the car alone - and that's the older two.

I do take things less seriously than I used to. Not war. Or injustice. Or violence. But I am learning what to take seriously - like war and injustice and violence - and what not to. Like having a good time and playing and pretending. Being a kid. (God bless Harry Potter video games though for allowing Andrew and Ryan to play a cool action game using a wand instead of a gun as a weapon!)

So, the next time you come over to the Connor house, you may just find yourself stepping in something wet. Probably from the water fight. Or not. In either case, feel free to grab a paper towel. I'm busy maturing as a mother at the moment.
Posted by Twintensity at 3:21 PM