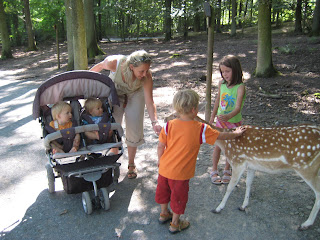 The double stroller was so indispensible to getting around those first two and a half years that I'd forgotten how limiting it was until our day trip to Ludwigsburg recently. Damon had taken the four kids on the train ride while I took the dog and the double stroller to the beer garden to try to find a seat. I spotted an open table halfway down an aisle - maneuevered around two single strollers, tried to push a third out of the way, couldn't get past and then looked up to see that I'd lost the table to someone faster without a double stroller to manuever.

Meanwhile the other diners observed me with curiosity, wondering too how I was going to manage, and probably taking bets on the outcome while at the same time counting their blessings, but noone thought to lend a hand. Today it didn't bother me though and as I laughed and sighed someone stood up to tell me that their table would be free in five minutes. I parked the stroller at the outskirts of the garden and manuevered my way to the table with only the dog.

It was only then that it hit me, why it didn't bother me and why I was so relaxed. I didn't NEED that double stroller anymore. Only a year ago I wouldn't have been able to park it at the outskirts; I needed it to keep the twins strapped in for their meal. Two years ago a meal without the stroller would have been unthinkable, most restaurants and almost no beer gardens don't have highchairs, let alone two. We used the stroller as a seat and as a restraint.

Now I didn't need it anymore. Damon and the kids showed up - our gracious tablemates more than glady relinquished the rest of the table to the oncoming hordes - and the twins scrambled up onto the benches like regular kids. Which they now are. Four kids at a regular table. I am free of the double stroller.

The double stroller is a blessing and a curse. A blessing because you wouldn't get around without it, a curse because it still limits your options in terms of what you can do.

When I had my second child, I slung him into the Baby Bjorn from day one and continued with life as always, chasing his two year old sister through the park, nursing on the run. He slept in it, ate in it, viewed the world from it as Icontinued on with life as usual. A little messier perhaps, but no big deal. In fact, I ended up at the bottom of the kiddy pool with him when I forgot to take the Baby Bjorn off and went down the slide with - as it turns out - the two year old AND the newborn. The baby woke up, the Baby Bjorn got wet, and then we continued on as always.

There was no forgetting that we had twins along.

Shopping for a new car centered around the fact that the double stroller would have to fit in the back - along with four kids, their bikes and the dog.

Getting anywhere revolved putting the stroller together - a five step process I had down to an art - and tucking both babies safely in it before dealing with the older two. The stroller allowed us to get anywhere at all. Later, it also became a form or restraint when I didn't trust myself to follow two two year olds in separate directions. We used it to feed them, on the run with their special bottle holders or in the restaurant, since most didn't have two highchairs available.

I had another stroller epiphany at the mall this month, the same place where I'd previously suffered from my Baby Bjorn envy. This time I took the twins in without the double stroller. We hold hands, we walk, I hadn't even thought about it anymore.

And then we hit the escalators. Matthew very proudly - and cautiously -got on but Aidan wasn't having anything to do with it. Moving stairs? I don't think so. People smiled as he backed away from this strange new object. After finally making it to the bottom he got off beaming and loudly cheered himself. "I did it." he exclaimed proudly. And we used the elevators as often as possible after that, each trip full of thrills and pride.

I was proud too. Proud that I could now take the next step with my twins, move beyond the stroller to the world beyond - a world full of escalators, full of pools only accessible through a flight of stairs, full of castles atop many multiple flights of stairs and full of adventures through tiny narrow doors and down narrow paths.

But proud too that I'd used that double stroller for all of its advantages, that I didn't stay inside and say it couldn't be done, that I'd brought that stroller to zoos and parks and pools and three or four countries in Europe, plus America.


So now I can get anywhere I want to again. Problem is, who is going to carry all of our stuff?
Posted by Twintensity at 3:54 AM