Matthew submitted his "Fox" poem to the Dorothea MacKellar poetry contest yesterday, so naturally Andrew decided to give it a go as well.

This - and three more following - is what he came up with in half an hour last night. 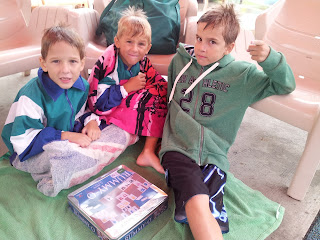 World War ll
Trees swayed in the howling wind,
Lords fainted at the sight
Of the screaming hawks and blood mixed with the soil,
Leaving traces of a fight.
Brave men shrunk from the Hell of Earth,
Children and mothers cried,
Soldiers and policemen
Had no idea who died.
All this can happen in a day,
But pay attention at thy fail
Of soldiers cursing
The Lord of Death upon their betrayal.

I DID change "the Germans" cursing the Lord of Death to "soldiers".  Enough racial guilt.

It's written by an 11 year old.  But its better than anything I could do!
﻿
Posted by Twintensity at 4:10 PM