I haven't managed to blog about Andrew's last two poems, or about Ryan's great essay comparing "Man From Snowy River" and "The Silver Brumby" yet, but my Home School Assessment for Ryan is due on July 10, so it will be typed up sometime after that.  After the move, the soccer try-outs, the engineering assessment, two birthdays and a medieval re-enactment.  I expect to surface again sometime at the end of July!  But I promise, I am going to try to ENJOY this time too.  It is busy but every day is a blessing. Shiva pushes, but he rewards as well!

Andrew and I edited some of his poems to enter them into a SLAM poetry competition at the Queensland State Library in Brisbane where he, Ryan and a friend of ours are going to take part in a poetry seminar on July 29.  The poems had to be 160 characters or less in length, so we really had to cut.  It took out a lot of his fluff and made them stronger.  We even sliced two poems and combined their strongest bits to make a new one.

Sigh.  Sometimes I wonder if I am home schooling the right kid! 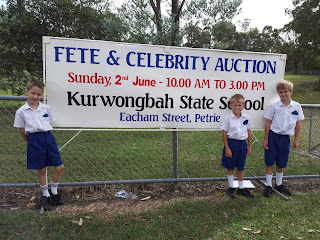 (Untitled: from a larger poem called “Love and Hate”)


Stay in it's own space.


They cannot change their fate.


Keep to your own side;


The Devil chose his fate


Full of love from a lake

A song of no pence


A principle of nature


No living creature can deny


Survival of the fittest

Posted by Twintensity at 4:56 PM