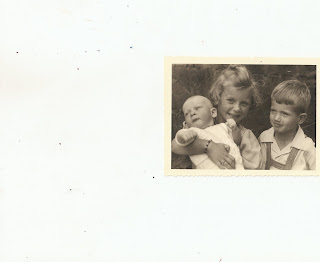 I think of his mother, my Oma, pregnant with what they THOUGHT were twins, mother of two small children already, watching the night skies light up as her city burned. What kind of a future could she imagine for her children?

Oma came to visit us a few times in the USA when I was still small. I remembered her as a serious woman. "Regal in her austerity" was the line I used in a highschool essay. Her black hair was always pulled back in a severe bun. She never wore pants. She always dressed in dark colors, even way before Opa died. This was in stark contrast to my American Grandma who wore her blonde hair down and bright summer-colored bermuda shorts.

I remember a recurring theme between my two grandmothers. Grandma would try to get Oma to go shopping in the USA. ''Buy a bathing suit for the pool.'' she'd say. "Buy some shorts and T-shirts, or at least a pretty summer dress while you are here." I never saw Oma in a bathing suit. It would have been black if she had worn one. Her skirts and sweaters were too warm for our Connecticut summers, but she was comfortable in them none-the-less. ''Oh. Those colors aren't for an old lady like me." Oma would tell Grandma. ''They are meant for someone young, like you.'' Oma was two years older than Grandma. Still is.

But Grandma's future husband came home from The War a hero. (He fought the Japanese on the Pacific front.) Oma's first husband, a German soldier, died early on. Her second husband, my Opa, was too old too fight. (Until the very end when they were sending anybody.) But he lost his factory, his livelihood, his country and his humanity.

Then the Russians came and he lost hope up ever getting them back.

He was an old, old, old, old man by the time I first remember him. And it stuns me now to think that he was only 70 when I was born. The War ended when he was in his late 40s. He and his young family fled East Germany when he was 60.

I never knew but a shell of an old man. But I can only imagine the bravery it took to leave. I can only imagine he did it for his children. He left the children from his first marriage in East Germany. His son became a prominent communist writer. His daughter, who had met her husband in a concentration camp when interred there for speaking out against government policy, moved to Israel and raised her children, my half-cousins, Jewish.

I grew up with cousins from Oma's first marriage. Imke now owns a specialty bookstore in Berlin. Her brother, Joerg, works for an international consulting firm. He is currently in Romania. Little Lars (who is now over six feet tall) is a nurse in Cologne. His brother Frank is a professor of - god, I would love to be smart enough to understand it - something chemical, subatomic, engineering or something of that sort.

None of us live near eachother, even within Germany.

My brother lives in Texas, my sister in Arizona. I am setting up home in Australia.

I'm sure this isn't what Oma envisioned when she looked upon the bombs falling on Dresden that day not so long ago. I'm sure she couldn't see anything but death and dishonor, futility and despair. She has thirteen great-grandchildren from the ''western'' cousins alone. (Opa's children were already in their twenties when my dad was born, and were living behind the Iron Curtain until twenty years ago, so I don't know anything about them. The Israeli cousins don't officially even know they are related to anyone German.) Oma's great-grandchildren are German, American, Italian and now Australian.

Funny enough, we cousins are a fifty-fifty split of free thinkers and super-achievers. (Sometimes both.)

We don't know eachother. We see eachother rarely, if at all. I assumed it was because I was raised on the other side of the Atlantic, and was too American to have anything in common with my German family any more.

But now I see my German side. I see that I am rootless here as well.

As the elder Herr Bauer and I stood looking out over his fields in Iglersreuth the other day we discussed my family's emigration. "Du koenntest mich nicht entwurzeln." he said. "You couldn't uproot me.'' And I imagined what it would have been like to have been born into a family who still owned and farmed their own land, who still lived together where they had been born for generations. Who KNEW their roots and who they were. (Who were lucky enough to end the war under American occupation and not the USSR.)

It would have been nice, I think. But it wouldn't have been me.

A lot of people tell me they admire our move to Australia. They consider us brave. They tell us they envy us, that they WISH they could do it, but that they don't have the courage or that they couldn't leave their families.

And I tell them it has nothing to do with courage.

It has to do with roots.

But I do know that I'm lucky not to be watching bombs fall, my country (any of them) destroy itself or it's citizens wage war on eachother for race, religion or power. I have the liberty and the power - and the fortune of circumstance - to determine my own future and that of my children.

Posted by Twintensity at 9:49 PM