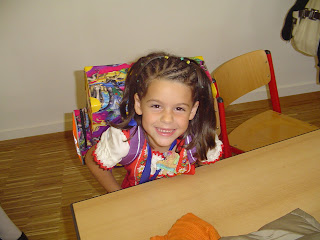 I've got the answer to why Germany is doing so poorly in international math standings.

Are you people kidding me?

What a complete waste of time.

The other thing you could do, since the above describes how to determine if a large number is divisible by seven or not, is just to divide the damn number by SEVEN!

This is in fourth grade. In second grade you aren't allowed to simply learn how to add the numbers, you need to prove you can do it in pyramid form, in line-graph form and in stick-figure form. All of which were originally meant to be aids to understanding, but have somehow turned into the objective itself.

Adding two numbers together is also wrong, regardless of a correct answer, if you haven't solved it according to the latest mind game that day. Next day, a completely new way. Again, meant to get the kids to THINK, but awfully confusing when they aren't allowed to digest the first way before heading on to the next.

By trying to prove to the whole world that our kids can do EVERYTHING, Germany isn't TEACHING them much of ANYTHING. (Americans learn it one way, the French another, but look look, we're so clever we can do it ALL!)

The smart kids ignore the whole thing. And can.

The rest don't seem to have any idea what is expected of them.

All of which seems to be perfectly fine with the teachers as long as they use rulers to make certain the lines are perfectly straight, and PEN to make it look neater.

Pen. If you take that pen, subtract it from two other pens and then twirl it counter clockwise around in your left hand, well, I think you know where you can stick it!
Posted by Twintensity at 9:21 AM