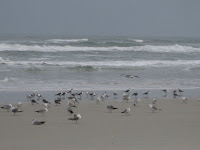 How does a twenty-first century housewife carry on an affair with a nineteenth century preacher? Let me introduce - or reintroduce - you to the words of Ralph Waldo Emerson. "Be, and not seem." As my own words take shape in my head, and as ideas struggle to take form, I feel no guilt in leaving you to words penned from a higher source - while I figure out the muddle of my own thoughts and get them down.


"There is a time in every man's education when he arrives at the conviction that envy is ignorance; that imitation is suicide; that he must take himself for better or worse as his portion; that though the wide universe is full of good, no kernel of nourishing corn can come to him but through his toil bestowed on that plot of ground which is given to him to till. The power which resides in him is new in nature, and none but he knows what that is which he can do, nor does he know until he has tried.

What I must do is all that concerns me, not what the people think. This rule, equally arduous in actual and in intellectual life, may serve for the whole distinction between greatness and meanness. It is the harder because you will always find those who think they know what is your duty better than you know it. It is easy in the world to live after the world's opinion; it is easy in solitude to live after our own; but the great man is he who in the midst of the crowd keeps with perfect sweetness the independence of solitude."


Taken directly from Ralph Waldo Emerson's essay "Self-Reliance" as found in "The Spiritual Emerson" by Tarcher Cornerstone Editions, 2008.
Posted by Twintensity at 1:42 AM