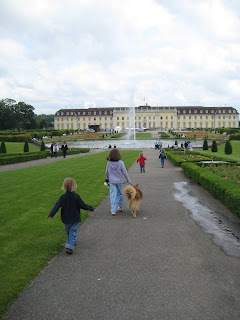 "What are you trying to prove?" asked one friend when she heard about my miscarriage. "You've already got four kids."

"But I don't understand." says my mother, "If you find it so much easier with two kids than with four, why are you even considering adding a fifth?"


How can I explain that the characteristics that got me through college and veterinary school, that got me INTO an Ivy League college and veterinary school are the same characteristics that keep me going now. I have never chosen the easy route. I took AP classes in highschool, did all the extracurriculars and worked after school. In college, I took more than the required credits per semester, took some classes two years early, did extra research and stayed for summer sessions.

All of which now seems like a complete waste of time now. Except I had fun too.

I get bored living the status quo. I never wanted the quiet home and hearth. I figured I'd be in Africa by now, letting a Maasai warrior watch the three or four kids I had while I continued with my research. They'd be educated in the evenings, learning from life in the wild. Never really thought about a husband at all.

I had a blast with the first kid. Couldn't wait to get out of Connecticut and show her the world. Living near Geneva with two kids was fantastic; within reach of the Italian Alps, speaking French and meeting people from all over the world. THIS was why I had kids. Okay, in comparison Germany has been a sobering reminder of reality, and the double whammy of twins slowed me down for a bit, but I'm finally waking up again to why I had kids in the first place.

I didn't want to be like everyone else in America; why the heck was I trying to turn myself into a German housewife? Same story, different country. Boring.

And so now that I am back again, now that I can do anything I want, the last thing I want to do is what everyone else expects of me. It's just not me.

I don't know if I will have a fifth child. I do know that it's an option. Not everyone else's option, but mine and mine alone. (Well, Damon has a little say in the matter, but he's wanted five since we met.) I've got other options too - going into a veterinary public health program in Berlin, working at a veterinary clinic in Stuttgart or perhaps wildlife rehabilitataion in the area, enrolling in a philosophy program in Freiburg. Writing my novel. All of which will still be there after another child.

I guess people worry about me, about what I am giving up for myself by being the mother to so many children. But you know - I love it. It's a job I am fairly good at, one I continue to grow into and learn from, one that keeps me moving forward and satisfied of work well done at the end of the day. And it's a damned lot harder than anything I ever studied in school. My life hasn't stopped for my children, my outside interests are still there. And they will still be there when the children are grown and gone.

Oh yeah - I also just love babies. And my sister is right, I am nuts too.
Posted by Twintensity at 10:14 AM