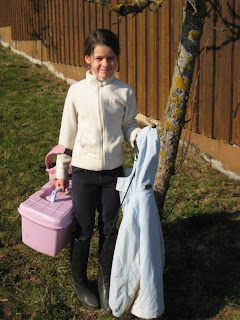 Ehrgeiz is one of those funny German words that seems to mean different things depending on the context in which it is used. It stems from two words, Ehre meaning honor and Geiz meaning stinginess or miserliness. Honor stinginess.

Although you want your child to HAVE Ehrgeiz or ambition, you do not want him or her to BE ehrgeizig or ambitious. Maybe it's the same in English, I don't know anymore. Frankly, I've never had to worry about it, having only heard the terms bandied about, mostly in a derogatory fashion, by mothers complaining about other mothers.

Neither Ryan nor Andrew have ever been accused of being ambitious.

I much prefer the terms friendly, courteous and just plain nice. Happy maybe? All of which DO have German equivalents which aren't worth translating because they don't hold the same amount of weight in general German society as they do with me. (Which isn't to say that NO Germans rate them highly, any friend of mine does, but only to say that the society as a whole doesn't emphasize their value to the degree that I would like.)

In the interests of offending noone, I seem to have lost everyone. Let me start over.

Watching Ryan and her friend Caroline riding on Saturday, I had a chance to talk to their teacher and comment on how well I thought they both were doing. I was very careful in my phrasing, carefully riding the line between proud mother (okay in moderation) and ambitious mother. I went so far as to mention - and give credit to - the program and instruction and not just to the children themselves. It really is incredible; I was not riding this well after two years of instruction. I mean, these two girls were RIDING the horses, in a canter, doing figure eights around the ring, not merely sitting in the saddle and wishing the horse might just do what they were hoping it would. (That was - and sometimes still is - my method of riding.)

"Well those two girls are really talented." the teacher replied. "It's a pleasure to teach them because they are able to take my instructions and apply them immediately." "YAY!" my inner voice cried out. "My daughter is TALENTED." Peace descended upon me, validation and fulfillment. But I had seen it too, in both of them, the previous week. At the ages of 9 and 10 they are able to take instructions and further their riding skills. I know from experience that you can HEAR the instructions, WANT to follow the instructions, believe you ARE following the instructions, and still just not get it. It's not that easy in any sport, but especially in a sport where you are dealing with the will of the horse in addition to your own.

The riding teacher continued. "Ryan has a lot of self-confidence and determination. The most amazing thing is her ambition to succeed." Hold up a moment? Rewind. Ehrgeiz? Did I hear that right? MY CHILD has Ehrgeiz? To hell with third grade math, she should be spending more time at the barn.

I've been learning how to rein in my own ambitions for Ryan recently. Since the German education system is so competitive at an early age, many parents with dreams of college for an academically challenged child choose to have the child repeat third grade. The decision on whether the child enters the university or trade school track is made in fourth grade. Just after Ryan turns 10.

Although none of Ryan's teachers recommended having her repeat the third grade - they all feel she is unfocused rather than unable - the system still allows me to decide if I would like to have her repeat it. And I'd toyed with the idea of giving her more time to absorb and understand the information. Had the system of teaching been different, had Ryan been given a chance to properly absorb and better understand the information I would have considered it. The problem is the system here presents the material quickly, with very little review. It's just too quick, with not enough repetition, for Ryan. I saw no sense in repeating the same speedy merry-go-round twice only because I want Ryan to go to college.

So there it was. Should Ryan repeat third grade? For her benefit or for my Ehrgeiz?

We've made a deal, Ryan and I. If she does well in the fourth grade - and by well I mean maintaining a C average - she will be allowed to ride two times a week as a Christmas present. (Let's face it, the kid doesn't need any more plastic horse figurines.) I haven't given up on the academics; I've just changed the focus from achievement to learning. And I'm not pushing the riding; I'm just helping her develop the strengths she does have. Self-confidence and determination. If she can't find them in the classroom then she'll find them in the ring.

And although I still have moments when I'm fairly certain the fairies sent her, I know that I'm her mother; I just want her to be happy.
Posted by Twintensity at 1:35 AM