Yeah, I made Andrew enter the contest too!! 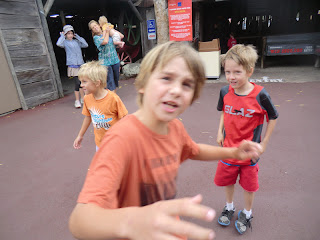 Suddenly I was being patted on the back by a bunch of people I didn't know. A foggy mist of happiness and embarrassment crept into me. I had inherited the billion dollars Mrs. Ptarmigan had left in her will to a worthy person of the town. Boy was I glad that I had helped her with her household chores!

The mayor gaily came down to shake my hand. He might have been drunk, but I wasn't sure. After him lots of other people came, only they weren't waddling, drunken, over to me. They were all very unusual. One person specifically caught my attention. Instead of a smile on his face his face was filled with hatred. He did come up to me, but didn't congratulate me. Instead, he whispered coldly, “Give me the money!” I looked him in the eye. It was a horrible and disturbing sight. He had tattoos all over his forehead, temple and cheek, scars on his jaw, other temple and scalp and, I noticed with horror, a knife clenched in his hand....

The next few weeks were okay, my family was happy that we had got the billion dollar fortune, but sad that Mrs. Ptarmigan died.

But then I got lost in town. I was walking along the street in town with my family when I stopped to tie my shoe. I don't think my family noticed, because when I got up, they were gone. I stood there for a moment, then walked along an alley, yelling. I never found them. Eventually, I got tired of yelling and screaming. So I found a man and asked him for help. He just stood there, transfixed, then slowly, he began to turn around. I gasped. It was the gangster from before!

I didn't breath. I just stood there, frozen in horror, when he pulled something from his pocket. It was the knife! Before I had time to react, he leapt at me, his blade aimed for my heart. I smiled as he flew past me, then winced at a terrible and sudden pain coming from my arm. He was smiling cheekily, then began to laugh a cold, evil laugh.

First, I pulled the knife out of my arm, cut his arm, and threw it aside.

“Then take the stupid money! It's only giving me trouble!”

So I flung all of the money I had on me and walked off. That's when my mother called. She had a message for me.