From the Mouth of Andrew

The problem is that I heard everything that happened that day from one of my four kids.  Before I'd pulled out of the school parking lot.  I had the rundown of who was swearing at which teacher, where the kids were pulling down their pants, which fifth grader was making out with which sixth grader, who was smoking, who bullied who, why that kid got sent to reflection (at some point, reflect on THIS mates, call it detention and give them something they can REALLY reflect on!). 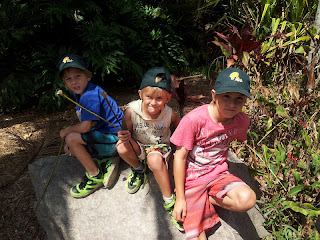 The last day of school Andrew sat next to me in the car looking slightly ill.

"Are you sad to be leaving your old school?"  I asked him.

"I  just don't understand why she had to pull us all in during break to talk to us.  It was my last break." 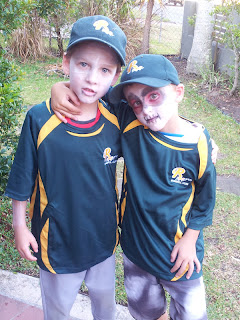 Look, even I don't want to post EVERYTHING that was going on.  Suffice it to say it WAS time to go and that Andrew had a reason to be looking green.  I mean, who DOES that sort of thing?

I know.  Getting over it.  Just not quickly.

I was even angrier once I realised the inequity here was just as brazen as in the USA.  I mean, how can we have this huge disparity only a five minute drive across the friggin' bridge, for crying out loud? 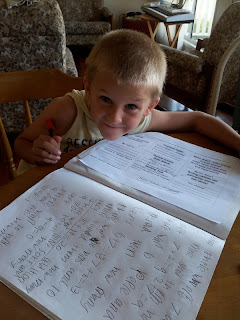 It is so nice to hear what the kids are talking about at the end of the day at their new school.

The twins are reading at levels far higher than their previous school suspected.  Aidan is done with those damn numbers, which according to the numbers, means he is reading levels ahead of Ryan.  (This is why I don't like numbers!!!  She is reading fine now, books a day since we started homeschooling, she will just probably never get the leap to full inference.) 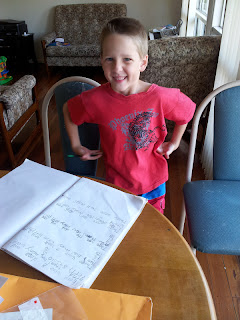 They are talking Zac Powers and Kai Masters and chapter books without pictures.  Although I beg Matthew to bring me some nonfiction books about snakes or dinosaurs or bridge building or something every now and then.  Because I like the pictures.  And because I am tired of reading about 12 year old boy spy superheroes.  And because the Kai Masters series has got to be the worst written series for young readers ever.  With incomplete sentences.  Like this.  Of two or three words.  With capital letter and periods.  Which have.  My kids.  Reading. Like.  This.

Remember people, I have to have them read to me TWICE! 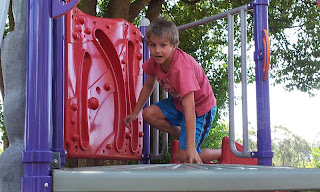 Reflect on the adult supervision during breaktime.


Andrew is talking about mercury and its liquid state at room temperature.  Andrew is asking me if I know why water condenses around the outside of a glass of ice that has been turned upside down so that the ice or anything  melting inside of the glass cannot escape.  And then explaining it to me.  BEFORE we reach the car.  Andrew knows the principles behind how a photocopier works.  (And cares!)

Today I heard about how you can get a dead frog to twitch by hooking him up to electricity.

Uh yeah, sometimes you do wonder what they are learning at school!

Except he's also finally told me how relieved he is to be at a school where the kids his age aren't all pairing up and holding hands and kissing during break. 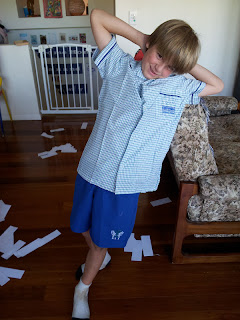 He's coming home and scribbling maths equations on the board because he is so excited.

"I just tell my teacher we hadn't learned that yet at my old school and she fills me in.  We are learning so much faster."

Because the teachers aren't having to spend their day teaching kids how to behave, they are able to teach the kids what they were meant to.

My kids are still telling me everything they can remember about their day at school.

But they are speaking a new language.

Although twitching dead frogs aren't half as gross - or upsetting to me - as what they were coming home with before.
Posted by Twintensity at 3:52 AM