Has anyone else noticed that Disney's 'The Lion King'  is a condemnation of the exploitation of Africa by greedy multinational conglomerates?  You know, the hyenas, in conspiracy with an evil self-serving African ruler, raping the land, destroying its natural resources.  The lesson being, perhaps, that it is up to the Africans themselves, the rightful owners of their lands, to stand up to the hyenas and take back their pride lands. 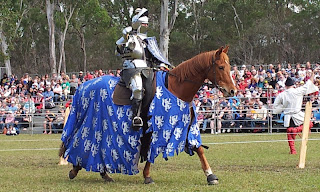 Well, then you probably wouldn't agree with the game the boys and I were playing outside last week either.

Aidan and Matthew wanted to be knights.  And Ian was just crawling around growling.  Since I just wanted to sit in a chair and watch, I got to be queen.  This worked in everyone's favour.

"Mommy, Mommy, you are the queen and we are the knights who have to do what you say,"

"Well all right then, protect me and keep an eye out on that little lion heading to the edge of the lawn, will ya?" 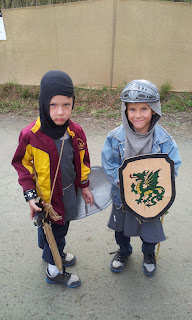 "But Mom, we want to go and invade Lava Land."

"Well in that case, you just go right ahead and invade then.  Have a good time."

"But Mom.  We HAVE to really fight them.  We want their lava."

"Well, that's called imperialism but that's okay too.  You go and take their lava.  I'd like geothermal energy to heat my castle." 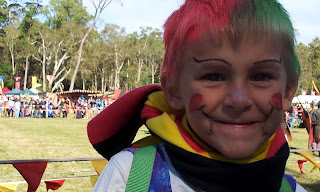 "Oh well yes, then, certainly invade.  If you can give me a moral imperative to steal their natural resources, that makes it all the better.  Way to go boys!"

They looked at me oddly.

I had a good chuckle, they happily depleted poor Lava Land of geothermal energy, and Ian stopped growling long enough to stick a piece of chalk in his mouth. 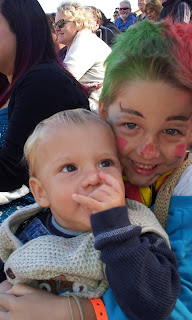 It reminded me of the good old days, back when Andrew was first starting to have his play figures kill eachother.   And I would make him go and get the ambulance and put them back together.

It's a wonder the boy has turned out half as well as he has!

And I do take things lighter now. 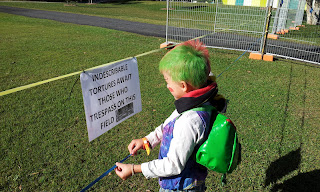 Light enough to let them watch "COPS" sometimes, as a lesson in how not to be idiots and what happens when you decide not to have an education.

Not light enough to let them watch Spider Man without a moral about great power and great responsibility though.

Or to read Narnia without discussing its Biblical allegories.

I mean, come on, you invade Lava Land, you wanna be sure Spider Man and God are on your side, right?! 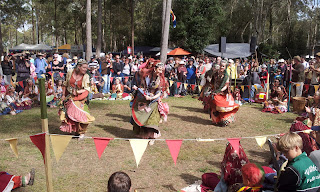 Sigh.  Maybe I need to get out more with people my own age.

Posted by Twintensity at 4:38 AM