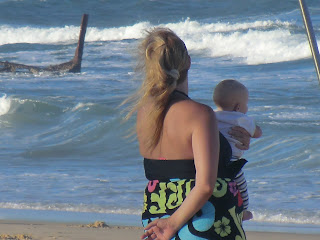 As with most new things, the hardest thing was starting.

Meaning that I first had to get off the waiting list and into the class.

I was proud of myself just for signing up.  Baby steps.

Then I got a call saying I could actually work out too.

I'd been up with Ian - feverish and snotty - since about 2:30 AM so getting there by 7:30 wasn't going to pose any problem.  It was going to be a pleasure handing him to Damon and getting out of the house.  I was even leaving early to give my some time by myself to warm up.

Until I reread the directions and noticed it started at 7 AM and not 7:30.

And that I was already 10 minutes late instead of 20 minutes early.

Would they let me join in without my sun hat?

Queensland has the highest rate of skin cancer in the world; they take this stuff seriously.  Now, anyway.

On the drive over I thought of how lame it was to join in late.  How embarrassing it would be.  How it felt to workout in Germany - the biking class for example where all the guys looked like Lance Armstrong and the women like Kate Moss.  In proper attire.  (Sun hat not necessary.)

Would the instructor even let me join in late, after the warm up, with the permission slip that I hadn't sent in (I was only on the waiting list and then the baby was sick and.....) still in my hand?

I proposed a drive-by to myself, full of shame, and dreading a 30 minute jog by myself to make up for my failure...and to punish myself for my inadequacy.

And then I saw a group of really nice people, just like me, warming up at the shores of the lake.

I took a deep breath, did a second drive by.

Pulled into the parking lot.  And got out of the car.

"No worries, Christine.  Glad you could join us."

And we did squats and push-ups and lunges and sit-ups and...an hour of 20 second intervals with 8 reps each.

I can barely move today.

It was the best time I have had in ages.  Beats staying up with a sick baby anyday.  Or night.

"Now you'll be sore tomorrow."  the instructor told us,  "be sure to keep on moving over the rest of the weekend."

I've got laundry to hang and floors to clean and stairs to climb and kids to pick up.

Each aching muscle reminds me of my morning in the cool sunshine at the edge of the lake.

And how I didn't let my fears of inadequacy keep me from showing up for it.
Posted by Twintensity at 6:29 AM