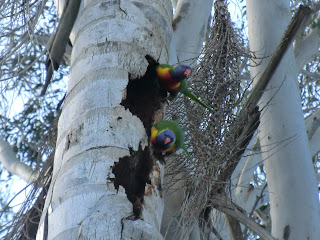 These little guys have taken up residence in the palm tree out back.  I am going to assume one of them ISN'T a guy!  Flocks of these rainbow lorikeets have joined the ibises and kookaburras and cockatoos and other parrots nesting out in front of our complex.  Yes, they are LOUD neighbors, especially right before sunrise and then again at sunset when the cockatoos feel the need to practice fighter-bomb formations all around our yard!

But I get worried now if I DON'T hear the kookaburras laughing at us at 3:45 AM.  And yes, I DO believe they are laughing at us.  Although I am glad someone told us they sound more like monkeys than laughter because that made them much easier to identify.  I am still waiting to hear the sounds of pigs grunting - because that means the koalas have decided to share tree-space for breeding.

The kookaburras also woke us up every morning while we were camping over the Easter holidays.  Hearing a kookaburra laugh makes you realize how silly you really are!  It's like two people across a crowded room suddenly pointing at you and laughing at loud.  You immediately want to check your zipper.  I think kookaburras were put on this earth to keep us from taking ourselves too seriously. 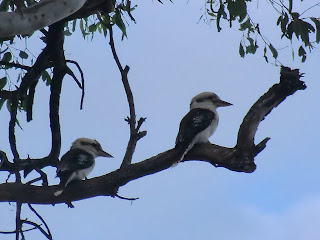 There are signs that I am going Aussie.  I drink milk in my tea now.  (And it is chai tea, which you can actually get here - yay!)  I wear summer dresses to just pop on over to the neighbors' that would be considered personal lingerie in Germany.  (They MAKE shirts with bras built in here so that you don't have to wear them, yay!  The store mannequins dress wrinkly AND I even bought a skirt that you are supposed to tie up after washing so that is stays properly crinkled.  Maybe it's not that I'm going Aussie.  Maybe I just found the perfect place to be who I was all along!)

I can identify the Southern Cross.  AND Orion's belt, the only constellation I could consistenly identify in the Northern Hemisphere and one I was really going to miss seeing.  (If Ryan was named after anything, it was Orion's belt and Prince's song "In the Arms of Orion.")  We kept spotting it here and telling ourselves not to be silly.  But no, Orion can be seen in the Southern Hemisphere too.  He is lying on his side with his sword pointing in the air (hmmm!) - and the Aussies call him ' The Dipper' since lying that way he looks like a large ladle.  But it's OUR Orion.  And it makes me happy to have him here.

But I don't think I will EVER be Aussie enough to take the wildlife around me for granted.  I have always LOVED birds.  They don't need people.  The ones I really like - like parrots and birds of prey and herons - can really cause some damage.  I gotta like that in a species.

Our new neighbours are so fresh.  (Look at that, I even brought myself to spell 'neighbours' with an 'o'!)  As I was hanging the laundry out to dry this week, our lorikeets were building their nest, cheekily dropping bits of inner bark dirt onto our clean sheets.  Last night, as I was pulling down some school uniforms, a HUGE chunk of bark came down off the gum tree.  Practical joke or attempted territory expansion?

Then they twist their little heads and look to see what I am up to down here.

Worth a bit of bird shit on the sheets, I'd say!  (Noting however that we have ONE breeding pair and NO shit yet!)
Posted by Twintensity at 11:03 AM